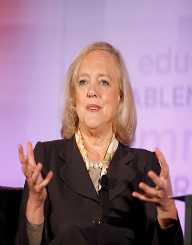 Meg Whitman was born on August 4, 1956, in Cold Spring Harbor, New York, USA. Her parents are Margaret and Hendricks Whitman. She also has two older siblings.

After graduating from college, Meg Whitman earned a job working with Procter & Gamble. This was her introduction to her business career. However, she only worked here for about two years before she moved to her husband could continue his education. After her move, she began working at Bain & Company, which is a business-consulting firm. While there, she had the opportunity to work with high profile clients, including Disney and Hasbro. Working with these important clients gave her the job experience she needed to move up the corporate ladder.

In 1998, Meg Whitman began working for eBay as its CEO. At this time, eBay and online shopping, in general, was a fairly new concept, and many people were unsure of whether the company was going to take off or not. Over the course of about a decade, eBay transformed from a small start-up company into one of the biggest names in online sales. While working with this company, Whitman also purchased Skype. Eventually, in the late 2000’s, Whitman resigned from her post of CEO.

In 2009, Meg Whitman turned her aspirations from business to politics. It was in this year that she announced that she planned on running for the position of governor of California. She ran as a conservative Republican. She hoped that her background in business would ensure voters that she would make a good politician.

She ran an expensive campaign, which was in part funded by herself, donations, and John McCain. Even though she spent almost $200 million on her campaign, she still lost to Jerry Brown. This was in part because she had never run for a government office before, so she was inexperienced, and her campaign was not as effective as it could have been.

Since resigning as CEO, Meg Whitman has been approached to take on high-level jobs at other major companies, like Uber. However, she did not take on the job offer. As of February 2018, it is still unknown where Whitman’s career path will take her next.