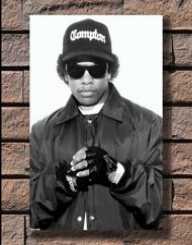 After leaving high school, Easy-E was involved in drug dealing. Eventually, he saved enough to start a record label, Ruthless Records. Soon he was recording what later became known as Gangster Rap. Artists he worked with included the rap artists Dr. Dre and Ice Cube. They formed a rap group N.W.A. and together with DJ Yella, MC Ren and D.O.C. released an album N.W.A. and the Posse (1987). The follow-up album Straight Outta Compton was a huge hit and went platinum (1988).

Easy-E and Dr. Dre fell out, and N.W.A. disbanded in 1992. He continued producing and recording as well as working with artists in the Rap Gangster genre.  He also worked in radio. The former N.W.A. rappers were edging towards reconciliation, and there was talk about a possible new album when Wright fell ill in 1995.

His rap group N.W.A. were chosen by Rolling Stone as the thirty-third greatest rock ‘n roll artists of all time.

He married  Tomica Wright in 1995  and the couple two children. They married shortly before his death in 1995.  He also had seven other children. Easy-E was a Republican who supported George Bush in the early 1990s.

Early in 1995, Easy-E was diagnosed with AIDS, and he died of pneumonia on the 26 March 1995. One of his daughter’s E.B. Easy-E produced a documentary about her father’s death, A Ruthless Scandal.