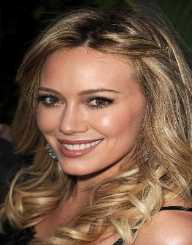 Hillary Duff is an American actress, singer, and songwriter who is best known for playing Lizzie McgGuire in the Disney Channel show of the same name.

Duff’s mother took her and her sister to California to try and break the young girls into acting. Duff’s father stayed in Texas, where he ran a chain of convenience stores. Duff received homeschooling from her mother. Her earliest work was in advertisements and modelling children’s brands.

Hillary Duff appeared as an uncredited extra in the TV shows, True Women and Playing By Heart, before landing her first big role in 1998. Duff played the part of Wendy in the made for TV film, Caspar Meets Wendy. She appeared in another TV film in 1999, The Soul Collector. She played a sick child in the TV medical drama, Chicago Hope, and was cast for the sitcom, Daddio, but was dropped before the show aired.

Losing Daddio, proved a blessing as only a week later she landed the title role in the Disney Channel’s Lizzie McGuire. The show was a live action teen comedy. It was first released in 2001. The show ran for 65 episodes which were spread over two seasons.

The show attracted over 2.3 million viewers an episode. The show saw the release of a wave of merchandise, including, dolls, books and a board game. The show propelled Duff to stardom. She also began her singing career with the Disney Channel as she contributed to a number of soundtracks released by the channel.

The Disney Channel supported Duff’s efforts to become a recording artist and they distributed her first album, Santa Claus Lane. The album was not a major success, although it did achieve gold certification.

Hillary Duff made her feature film debut in 2002. She played the young Lila Jute, a central character whose adult part is played by Patricia Arquette, in Human Nature. The same year she starred in the Disney Channel film, Cadet Kelly. Duff played a young teenage girl who ends up enrolled in a military academy. The film was the most watched ever in Disney Channel history at the time.

2003, saw Duff take the female lead role in Agent Cody Banks, she starred alongside fellow child actor Frankie Muniz. Duff also played Lizzie McGuire again in the Lizzie McGuire Movie. Duff also sang for the movie’s soundtrack and would release the single, Why Not, which achieved chart success in the Antipodes.

The soundtrack for the Lizzie McGuire Movie went double platinum. Duff went on to release a second album in 2003, Metamorphosis. It did not receive much critical praise, but it topped the charts in America and sold five million copies. Two singles were released from the album, So Yesterday and Come Clean. So Yesterday went platinum in Australia and Come Clean achieved chart success in America.

2003 also so Duff appear alongside Steve Martin in the film Cheaper by the Dozen. Cheaper by the Dozen grossed over a hundred and ninety million dollars, which makes it Duff’s highest grossing film. Duff ended her spell as Lizzie McGuire in 2004 at the completion of her contract; efforts to extend her deal fell through.

Hillary Duff starred with Chad Michael Murray in the film Cinderella Story, the film enjoyed mild box office success grossing over seventy million dollars. Hillary Duff also released Hillary Duff, her third studio album in 2004. The album sold 1.8 million copies. Duff was nominated for the Worst Actress of the Year for her performances in Cinderella Story and Raise Your Voice.

Duff expanded into fashion design in 2004, with the launch of Stuff by Hillary Duff. The clothing line was distributed by Target. Duff starred in The Perfect Man in 2005. She also released a compilation album that year titles, Most Wanted. The album also featured the new single, Wake Up, which would achieve Gold status. She also appeared in Cheaper by the Dozen 2, her performance was panned by critics.

In 2006, Hillary Duff starred with her sister in the film Material Girls. She launched her fragrance, With Love Hillary Duff, in 2006. Duff received critical praise for her fourth studio album, Dignity, which was released in 2007. Despite this it was not as commercially successful as her other albums and only gained a gold certification. The singles With Love and Stranger, did chart well despite the lacklustre commercial performance of the album. Her clothing line was discontinued in 2008.

Duff became a recurring character in the TV series Gossip Girl in the shows third season. In 2009, Duff worked with DKNY to design a line of clothing. In 2015, Duff released her fifth studio album, Breathe In, Breathe Out. It did not receive any certification.

Hillary Duff donated a quarter of a million dollars to the victims of Hurricane Katrina and donated a further two and a half million meals to the victims of the hurricane. Duff has also been an advisor and ambassador for a number of children’s charities and foundations. She is a promoter of LGBT rights. She is also an animal rights campaigner. She also visits children’s hospitals and has been the face of a number of campaigns to raise funding for hospitals.

In 2001, Hillary Duff began dating Aaron Carter. The two had an on-off relationship for three years. It was widely reported that Carter was also involved with Lindsay Lohan at the time. She next dated the front man of the band Good Charlotte, Joel Madden.