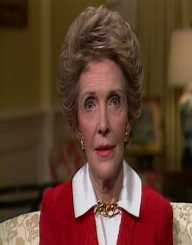 Nancy Reagan was born 6th July 1921, to Kenneth and Edith Robbins. She was born in Manhattan, New York, United States. Her father was originally a farmer but became a car salesman; her mother was an actress, known as Edith Prescott Luckett. Nancy Reagan was their only child.

Whilst still a youngster, her parents separated, and they divorced in 1928. Her mother traveled all over the U.S. trying to find acting work, and Reagan lived in Maryland with her aunt and uncle.

Her mother remarried in 1935, to a well-known neurosurgeon named Loyal Edward Davis. Nancy Reagan was reunited with her mother, and the family moved to Chicago. Reagan got on very well with her stepfather.

Nancy Reagan was enrolled in the Girls’ Latin School of Chicago and graduated in 1939. She then studied at Smith College in Massachusetts. She graduated in 1943 after studying English and drama.

Nancy Reagan’s first appearance on screen was in 1940 when she filmed a short commercial for the National Foundation for Infantile Paralysis.

After college, Nancy Reagan worked in a department store for a time and was also a nurse’s aide. Through help from friends of her mother that worked in theatre, Reagan decided to pursue an acting career.

She debuted on Broadway in 1946, followed by a screen test with Metro-Goldwyn-Mayer Studios in 1949. Nancy Reagan started with small support roles but was soon acting in the more leading roles.

Nancy Reagan was released from her contract with MGM in 1952. It was a big year for Nancy Reagan, as she married Ronald Reagan that same year, and had her first child. Over the next few years, Nancy Reagan would star in three more movies. These were Donovan’s Brain in 1953, Hellcats of the Navy in 1957, and Crash Landing in 1958. Reagan had acted in 13 movies in total, plus several television series before she retired from acting in 1962.

The Reagan had two children, a daughter, Patricia, known as Patti, and a son, Ronald, called Ron. There were also two children from Ronald’s first marriage.

Although her relationship with her husband was very close, unfortunately, the same could not be said for the relationships with her children. Quarrels were often reported in the press, and Patti seemed to go out of her way to rebel against her parents. That having been said, when Ronald’s disease was diagnosed, Patti reconciled with Reagan, and the two spoke on a daily basis.

Into The Political Arena

Her husband Ronald Reagan went into politics and was elected Governor of California, which he served as for two terms. Nancy Reagan was the First Lady of California. Unfortunately, she didn’t like living in Sacramento which was the capital of California.

The family moved out of the Governor’s Mansion and into a house in one of the wealthy suburbs. Officials weren’t happy as they thought the house was a fire trap. Their constituents weren’t happy, as they saw the move to be snobbish. This was despite the fact the Reagan’s paid for the lease themselves.

They had a new Governor’s residence built in Carmichael, but it was only just finished as Reagan left office in 1975.

As The First Lady of California, Nancy Reagan involved herself in various charities. These included visiting the elderly, veterans, and the handicapped. Reagan also helped to bring attention to the Foster Grandparents Program.

The Reagans also held dinners for former Vietnam War veterans and POWs, not only when Ronald was Governor, but also while they were in the White House.

Her husband ran for the Presidency in 1976 but lost. Nancy Reagan played a low-key role in the campaign. In 1980, however, Ronald ran again, and this time Nancy Reagan played a prominent role, and it became clear how much influence she had over her husband. Ronald Reagan became the 40th President of the United States of America. Over previous years, the White House had fallen into a state of disrepair. One of her first tasks as First Lady was to refurbish and renovate the White House. Reagan didn’t use public money but had private donations instead. She turned the White House into a home for her family.

Nancy Reagan was known for her elegance and her fashion sense. She did come under fire in 1988 when she disclosed that she had received many fashion items including clothing and jewelry during her time as First Lady. She received a belated tax bill, but it was paid in full. As America went into recession, there was much disgruntlement among the public as they felt Nancy Reagan was out of touch with ordinary people as she spent a lot of money, even though not all from the public purse. Nancy Reagan handled the criticism well, and her reputation and popularity was soon restored.

She held many functions at the White House to support her husband, including the hosting of the Soviet leader of the time, Mikhail Gorbachev, and his wife, Raisa. There was an attempted assassination on Ronald Reagan in 1981, and Nancy Reagan never left her husband’s side during his recovery. In 1985, Ronald Reagan was sworn in for his second term as President. Nancy Reagan was known as being quite difficult to get along with by the staff. None of them wanted to be on the wrong side of her. Unknown to many, Nancy Reagan consulted an astrologer after the assassination attempt. She took it so seriously that the White House schedule was color coded by the advice given by the astrologer.

Ronald Reagan died in June 2004. He had been diagnosed with Alzheimer’s disease. Ronald was given a State Funeral, as was befitting of a President. Reagan remained composed in public and invited several world leaders to speak at her husband’s funeral.

She published her autobiography in 1989, called, My Turn: The Memoirs of Nancy Reagan.

In 2008, Nancy Reagan had a fall at her Bel Air home. After a medical examination, it was determined that she had fractured her pelvis and sacrum. It was noted in the press though, that she was walking significantly slower than she had previously.

In March 2012, Nancy Reagan had another fall. She suffered several broken ribs, which took her some time to recover from.

Nancy Reagan passed away in March 2016. She was 94 years old and died from congestive heart failure.

Among her various awards and honors, in 2002, Nancy Reagan was awarded the Presidential Medal of Freedom by President George W. Bush.

She was also awarded the Congressional Gold Medal in conjunction with her husband in that same year.

In 1982, Nancy Reagan launched “Just Say No,” a drug awareness campaign for young people. She took it one step further in 1985 when she invited several First Ladies from different countries to the White House for a conference in relation to drugs and drug abuse. With influence from Nancy Reagan, her husband, as President, signed a drug enforcement bill in 1986, which provided $1.7 billion in funding to fight the war on drugs.

Nancy Reagan established the Nancy Reagan Foundation in 1989. Its aim was to continue the education on the dangers of drug and substance abuse.