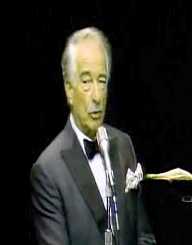 Victor Borge was a Danish-American pianist whose career was of a classical musician but best remembered for his comedic acts both in television and on theater.

Victor Borge was married twice in life. His first marriage was in 1933 to Elsie Chilton. Although their marriage was short-lived, the couple adopted two children before their separation namely Ronald and Janet Borge. He was married a second time in 1953 to Sarabel Sanna Scraper who bore him two children named Frederikke and Victor Bernhard.


The Birth of a Piano Prodigy

Victor Borge was born on January 3, 1909, as Børge Røsenbaum in Denmark's capital, Copenhagen. He was the son of Bernhard and Frederikke Rosenbaum both of Jewish descent and worked as musicians in the Royal Danish Orchestra.

His father was a violinist at the orchestra while Borge's mother was a pianist which greatly influenced and exposed him in the world of music in his formative years. At the tender age of 2, he started learning how to play the piano and performed his first piano recital when he was 8.

With his excellent skills at the piano, he was granted a full scholarship in 1918 at the Royal Danish Orchestra where he went under the tutelage of famed musical figures such as Victor Schioler, Fredric Lamond, and Olivo Krause.

Upon graduation, Victor Borge entered the world of classical music wherein he made his debut performance at the Old Fellow's Lodge building's concert halls in 1926. Soon enough, Borge started incorporating comedic routine and acts into his performances much appreciated to the public's entertainment. Because of his peculiar and amusing acts, he was dubbed as the Clown Prince of Denmark.

However, Victor Borge's performances were cut short upon the Nazis' occupation of his homeland during the Second World War, so he relocated to the United States in 1940 where he learned to adapt to the American setting. A year later in 1941, he appeared on American singer and entertainer Rudy Vallee's radio show where he was discovered by Bing Crosby. At the time, Crosby worked at the Kraft Music Hall as a singer and actor which led to a number of musical and comedic acts that made Borge the recipient of the 1942 Best New Radio Performer.

Borge's fame rose to even greater heights due to the success of his show on NBC network entitled The Victor Borge Show that aired in 1946. He even co-hosted alongside Ed Sullivan's show, Toast of the Town, in 1948 where he also attained his US citizenship via naturalization.

He made history when his one-person show entitled Comedy in Music became the longest running show in the theater which started in 1953 at New York City's John Golden Theater. A total of 849 performances were executed and is also recorded in the Guinness Book of World Record. Besides his Broadway performances, he was also a popular TV figure especially to young kids due to his appeal on humor on music where he made appearances on The Muppet Show, Sesame Street, and What's My Line?

Victor Borge co-established the American Pianists Association alongside Julius Bloom and Anthony P. Hawig in 1979. The association is responsible for organizing major piano competitions that produce two awards for the succeeding competitor: the Jazz Fellowship Awards and the Classical Fellowship Awards.

On its 550th anniversary in 1998, the Royal Danish Orchestra appointed Borge as one of its honorary members.