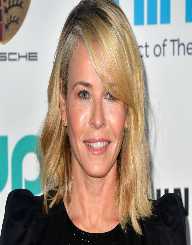 Chelsea Joy Handler was born on February 25, 1975, in Livingston, New Jersey. She was the youngest of six children in her family. Handler’s father was a used car dealer, and her mother, a homemaker. Her mother was a German immigrant who came to the United States in 1958. She was diagnosed with breast cancer in 1989 and died after battling cancer for ten years. Handler’s father was Jewish, and she was raised in Reform Judaism. Handler grew up in a good neighborhood and had a happy childhood. She moved to Los Angeles when she was 19 years old, to pursue acting. To support herself, Handler began to work as an actress. However, when she was 21 years old, Handler decided to pursue stand-up comedy full time, since she discovered her storytelling abilities.

Handler started out her career as a member of the Oxygen network all-female cast for a hidden camera/practical joke reality TV series Girls Behaving Badly. The show was on the air from 2002 to 2005. The handler then began appearing in several other shows like Weekends at the D.L., The Bernie Mac Show, The Practice and My Wife and Kids. Handler also began working as a corresponded on The Tonight Show.

Handler’s big break came in 2006, when she began hosting her show on E! named The Chelsea Handler Show. The show lasted for two seasons. The following year, Handler performed on the Comedy Central’s Hour Stand-Up Comedy Tour in the United States. Her stand-up performances have been aired by VH1, Comedy Central’s Premium Blend, and HBO. In 2010, it was announced that she would be hosting the 2010 MTV Video Music Awards. With this, she became the second woman in history to host VMA’s after Roseanne Barr.

In 2007, Handler began hosting her comedy series Chelsea Lately on E!. The half-hour long show was a major success, averaging more than half million viewers in its premiere. The show continued to air for more than 1000 episodes, ending in 2014. Handler made a spin-off of the show, a documentary After Lately. The show debuted in 2011 and included guest stars like Jay Leno, Reese Witherspoon, Johnny Knoxville and many others.

In 2008, NBC aired the sitcom Are You There, Chelsea? Based on Handler’s book Are You There, Vodka? It’s Me, Chelsea. The show aired for one season. In 2016, Handler began work on the documentary series for Netflix, Chelsea Does. The show consisted of 4 episodes on marriage, Silicon Valley, racism, and drugs. The same year, she began hosting her new talk show Chelsea on Netflix.

Besides her on-screen work, Handler has also authored five books that have all made the New York Times Best Seller List. Her first book was My Horizontal Life: A Collection of One-Night Stands in 2005. The book describes her various sexual encounters throughout her life. Her next book was Are You There, Vodka? It’s Me, Chelsea in 2008. The book was a collection of humorous essays and became a major hit. Her third book Chelsea Chelsea Bang Bag was released in 2010.

In 2010, her publisher gave Handler her publishing imprint, Borderline Amazing/A Chelsea Handler Book. She signed a three-book deal contract with the imprint. Her first release was Lies That Chelsea Handler Told Me, which was released in 2011. Besides her books, Handler has also written columns in Cosmopolitan and NOW. In 2014, she released her new book Uganda Be Kidding Me. She also did a stand-up performance of the same name, released on Netflix in 2014.

In 2010, Handler was ranked in No. 98 on the Forbes Celebrity Top 100. She has also been on the Time Magazine 100 Most Influential People list. Handler was on the cover of Playboy magazine in 2009, in a non-nude pictorial. In 2009, Handler received the Ally for Equality Award from the Human Rights Campaign for her efforts towards LGBT rights.
In 2006, Handler began dating Ted Harbert, who was a formed CEO of Comcast Entertainment Group and was at the time overseeing E! channel. However, they broke up in 2010. In an interview in 2010, she revealed that she had had an abortion when she was 16 years old. She was also a supporter of presidential candidate Hillary Clinton for the 2016 election.