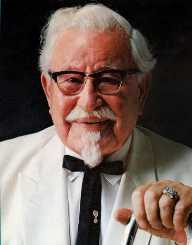 Harland David Sanders was born in the area around Henryville, Indiana, on September 9, 1890. His parents’ names were Wilbur and Margaret. His father passed away in 1895. Seven years later, his mother remarried, so the family moved to the city of Greenwood, Indiana. He dropped out of school when he was in the seventh grade.

Sanders first got a job as a farmhand at the age of ten. A few years later, he painted horse carriages, and he worked for a streetcar company. In 1906 and 1907, he served in the U. S. Army in Cuba. He then returned home, and he became a fireman. After that, he worked for several different railroad companies across the country. While working, he also took law classes from La Salle University in Chicago. He began his work as a lawyer in Little Rock, Arkansas. He left that job after three years, and he became a life insurance salesman.

In 1920, he started a ferry boat company. The business became successful, but he quickly lost his ownership. He then began a lamp manufacturing company, but it failed. He became a salesman for the Michelin Tire Company. After that, he opened up a service station for Standard Oil of Kentucky.

In 1930, Colonel Harland Sanders opened up a service station for the Shell Oil Company in Kentucky. He cooked the meals in the small restaurant in the station. His food became famous and attracted many visitors. He decided to expand, so he bought a motel in Asheville, North Carolina, in 1939. He renovated it and turned it into a restaurant. A few years later, he had to sell his business because of the economic hardships of World War II. During this time, he worked as a cafeteria manager in Tennessee.

Sanders created his recipe for making fried chicken. He used special ingredients and a pressure fryer instead of a regular pan fryer. He called his product Kentucky Fried Chicken. He set up the headquarters in Shelbyville. In 1952, he sold his first franchise to a restaurant owner in Salt Lake City, Utah. He then drove around the United States to look for potential franchisees. The business spread very quickly around the country. It also expanded abroad, starting with countries like Canada, the United Kingdom, Jamaica, and Mexico.

Colonel Harland Sanders became overwhelmed with the success of the business. In 1964, he sold the company to Jack Massey and John Brown. He gave away most of his franchises, except for the ones in Canada. He moved to Ontario in 1965 to oversee the operations there. He continued being the symbol of the company.

He appeared in commercials and television shows. He was famous for the white suit and the black string tie he always wore. He also referred to himself as Colonel. He did not get that title from the actual military rank. Instead, it was given to him as an honorary title from the State of Kentucky.

In 1909, Colonel Harland Sanders married Josephine King. They had a son named Harland Jr. and daughters named Margaret and Mildred. He and his wife often lived apart. While they were married, he began a relationship with Claudia Ledington Price. He divorced his first wife in 1947. Two years later, he married Claudia. She helped him run his business.

Colonel Harland Sanders had acute leukemia. He passed away on December 16, 1980, in a hospital in Louisville. He was 90 years old. He was buried wearing his iconic outfit. His funeral was attended by thousands of people.