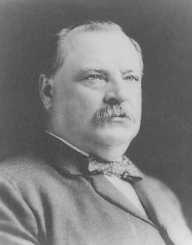 Stephen Grover Cleveland, an American Politician, and Lawyer was born on 18th March 1837 in Caldwell, New Jersey. His father, Richard Falley Cleveland was a Presbyterian minister and mother, Ann Neal Cleveland, from Baltimore, was the daughter of a bookseller. As a pastor his father's income was very insufficient to sustain the vast family of nine children, Grover being the fifth. So he grew up in poverty and was compelled to abandon his study for a brief period. He opted for a two-year mercantile apprenticeship in Fayetteville.

After completion of the contract, Grover returned to school again at Clinton with an enriching experience and valuable lesson in austerity. He received his primary and elementary education at the Fayetteville Academy and the Clinton Liberal Academy. In 1853 he again had to drop out of school due to the sudden demise of his missionary father.

After his father’s death, Grover Cleveland, fondly called as ‘Big Steve’ by his friends, secured the job of an assistant teacher at the New York Institute for the Blind in New York City. He soon left the job and circumstances forced him to relocate to Buffalo, New York. After transferring, Cleveland began searching for a job to help support his family and eventually found a clerical job with the help of his uncle, Lewis F. Allen, who was quite an influential person there.

Having already completed the elementary school, Grover Cleveland did manage to study law after securing a clerkship in the famous law firm of Buffalo - Rogers, Bowen, and Rogers with the help of his influential uncle and was subsequently admitted to the Bar in the year 1859. He started his practice in January 1863 after ending his three-year long association with ‘Rogers, Bowen and Rogers’ in 1862.

As a lawyer, Grover earned the excellent reputation for his ability to concentrate hard and his fantastic display of single-minded devotion and dedication to the cause of his clients. Soon he stepped into politics as a member of the Democratic Party.

Cleveland secured the nomination for the Sheriff of Erie County, New York with the help of his friend Oscar Folsom and won by a handsome margin. During his first political stint as the Sheriff, though he had to abandon his law practice for a while, he earned handsomely as the fees for the post of Sheriff was quite good at that time.

His success as the Mayor influenced the New York Democratic Party officials to offer him the nomination for the post of the Governor of New York State. Cleveland won easily and successfully began his top-level administrative sojourn. During this period, Grover Cleveland was nicknamed ‘Uncle Jumbo.’

In 1884, Democrats were looking for a Presidential Candidate, who had the potential to take the Republican rival head-on in the next Presidential Election. In the American political history, this period (1861-1933) is referred to as the Era of Republican Political Domination. The Republican nominee James G. Blaine was known to be dishonest and unprincipled.

On the other hand, the honest and principled nature of Grover Cleveland was in sharp contrast with the Republican Nominee. Hence, after much deliberation, Democrats handed him the nomination for Presidency. He won by a narrow margin mainly due to the support of a disgruntled, reform-minded faction of the Republicans, historically known as "Mugwumps” and with his now famous contextual campaign slogan ‘A Public Office is a Public Trust.’

During his first tenure as the President, Grover Cleveland governed the country with an iron hand; enacting reformative policies and curbing down on corruption. After completion of the mandate, he was again was nominated for the second term. But this time with resurgent Republicans and due to some unimaginative and poorly managed election campaign, he was quickly defeated by the Republican Presidential candidate Benjamin Harrison. So, in the year 1888, he again became a private citizen and started his profession with the law firm of Bangs, Stetson, Tracy, and MacVeigh.

As Harrison’s republican government increasingly became unpopular as early as in the year 1890, Cleveland decided to contest the next presidential election due in 1892. Thus, Stephen Grover Cleveland became the only and the first Democrat President to have won “popular vote” for three consecutive Presidential elections (1884, 1888 and 1892). This time Cleveland won easily with a thumping margin. Till date, he is the only American President to have served two non-consecutive terms. On March 4, 1897, he retired as the President.

Grover Cleveland was an icon for American conservatives. His fight for reform and fiscal conservatism is worth mentioning. He was a formidable policy maker. His integrity, self-reliance, truthfulness, and commitment to the principles of classical liberalism won him many accolades. He is one of the lesser known Presidents of America to date but could have been identified otherwise due to his exploits as the American Supremo.