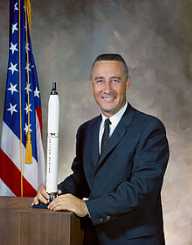 Gus Grissom was an American mechanical engineer, astronaut, and military test pilot. He was part of the Mercury Seven group that accidentally died in simulation.

Virgil Ivan Grissom is also known as Gus Grissom was born in Mitchell, Indiana, the USA on April 3, 1926. He was the oldest surviving child of Dennis David and Cecile King Grissom. His father worked as a signalperson for the Baltimore and Ohio Railroad company, while the mother was a housewife. He had three younger siblings namely Wilma, Norman, and Lowell. As a child, he grew up in a devout Christian background. He remained a steadfast Christian for the rest of his life. He was an adventurous child and served as a boy scout in his boyhood.

Grissom went to the local elementary schools in his neighborhood. He joined Mitchell High School. During his time in high school, he engaged employers for odd jobs to support his finances during the scout trips and other activities. He became a newspaper sales and delivery person for the Indianapolis Star during the day and worked for the Belford Times in the evening. He did other jobs at a local gas service station and meat market.

He took interest in aviation and flying planes when he started earning his money. He befriended a local lawyer who owned a light aircraft at the Belford airport. Grissom went on air rides with the lawyer at a fee. As days went by, he started learning the basics of flying and aeronautical engineering. Grissom started paying USD 1 for every aviation lesson he got from the lawyer.

Upon graduation from high school, Grissom enlisted into the US military. Grissom passed the entry exam for the US Army Air Pilot in November 1943. He trained as a cadet in the aviation department. In August 1944, he graduated from the military academy. He was deployed to serve at the Fort Benjamin Harrison Military Barracks in Indiana. He received the basic air pilot training at the Sheppard Field in Texas. Grissom never saw battle in WW2. By the time he could fly, the war was coming to an end. He was discharged with honors from the army.

He returned back home and got married. With marriage came huge responsibilities. Grissom worked several jobs to fend for his family. He then realized the need to return to college for his studies. He successfully applied for a scholarship to pursue his college education at Purdue University. He joined the university in September 1946 and graduated in February 1950 with a degree in science majoring in mechanical engineering.

When the US went into combat in the Korean War, Grissom reenlisted into the army. He formed the newly instituted cadets of the US Air Force. He underwent training and deployed at the Williams Air Force Base in Arizona. Grissom got his commission and wings to fly in March 1951. A second lieutenant of the air force, he faced a possibility of going to war.

He was deployed to the battlefield in the Korean War in 1952. Grissom flew his first combat mission in February 1952. He manned the F-86 Sabre fighter plane as a replacement military pilot. Grissom flew as part of the 334th Fighter Squadron stationed at Kimpo Air Base. He gained military experience in combat during the war. Second Lieutenant Grissom flew over 100 fighter missions into enemy territory. For his service in the air force, he got honored with military accolades. He got promoted to the rank of First Lieutenant and was sent to the Bryan Air force Base in Texas. He became a flight instructor.

In 1956, he graduated from the US Air Force Institute of Technology in Ohio where he studied aeromechanics. Later in the year, he went for the Air force Test Pilot School certification at the Edwards Air Force Base in the state of California. In 1957, he became a test pilot in the fighter plane department.

In 1958, he reported in the US capital for a selection exercise for the space program. He formed part of the 100 candidates called for the interview. On April 13, 1959, Grissom got the official confirmation of his selection. On July 21, 1961, he piloted the second Project Mercury flight, code-named Mercury Redstone 4. He embarked in the sub-orbital flight and stayed in the air for over 15 minutes. When the spacecraft landed in the water, the safety hatch opened letting water into the craft. He managed to escape from the spacecraft and was rescued.

He got the command of the Project Gemini in 1964. He commanded the spacecraft Gemini 3 on March 23, 1965. The fight orbited the earth thrice before landing. It took 4 hours and 51 minutes.

Grissom made the cut to command the Apollo 1 mission. On board, the spacecraft was Senior Pilot Ed White, accompanied by Pilot Roger Chaffee. The mission AS-204 was scheduled on February 21, 1967. On January 27, 1967, the three astronauts died in a blast during a preflight simulation exercise at Cape Kennedy. The investigators never found the cause that triggered the blast. Grissom was buried at the Arlington Cemetery.