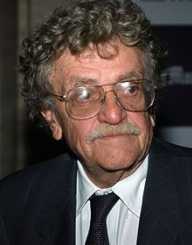 Kurt Vonnegut was born on November 11th, 1922. An American writer most distinctly known for his literarily work on the best-selling novel Slaughterhouse-Five (1969). His writing career lasted over 50 years, publishing a total of 14 novels. Vonnegut was no doubt one the most dominant American novelists of his time.

Kurt Vonnegut was born on November 11th, 1922. He was the son of Kurt Vonnegut Sr. and Edith and the last born of three siblings. Born and nurtured in Indianapolis, Indiana, his early teenage life full with a mix of experiences. In 1940, Vonnegut joined Cornell University, only to drop out after two years and join the United States Army.

He studied mechanical engineering at the Carnegie Institute of Technology while in the army as part of his training.  He then fought in World War II. Vonnegut got captured in the Battle of the Bulge by the Germans, becoming a prisoner of war.

He returned from the war (1952) and kicked off his writing career by publishing his very first novel, Player Piano which was well received by his readers.

After publishing his first novel, Player Piano (1952) Kurt Vonnegut published many other novels including Cat's Cradle and God Bless You, Mr. Rosewater. The two pieces did not do well commercially. His writing career breakthrough came when he published Slaughterhouse-Five (1969). This being his sixth novel and his first commercially successful piece. The novel which made it to The New York Times Best Seller list.

Vonnegut similarly engaged in writing many short stories and autobiographical essays including Fates Worse Than Death (1991), and A Man Without A Country (2005). His son later published his unpublished work.

Kurt Vonnegut received applause from many for his role in the burgeoning anti-war movement. He attended a number of rallies as a keynote speaker and also made a series of college addresses in the United States.

He taught creative writing at Harvard University (1970) and also taught as a prominent professor at the College of New York (1973-1974) academic year). In the following years, his popularity grew after publishing a number of satirical literature including Jailbird, Deadeye Dick, and Hocus Pocus.

Kurt Vonnegut married his longtime girlfriend, Jane Marie Cox after returning to the United States in 1945. Together, they had three children, their son, Mark, and two daughters, Edith and Nanette. Their marriage faced troubles which later exacerbated, eventually leading to divorce as a result of differing beliefs about Christianity.

Kurt Vonnegut died on April 11th, 2007 at the age of 83 after sustaining brain injuries several weeks before he fell at his home in New York.