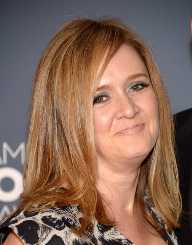 Samantha Bee was born on October 25, 1969. She is a Canadian-American writer. She is also an actress-television host, producer, political commentator, television host as well as a comedian.

She was renowned for her appearance in ‘The Daily Show with Jon Stewart.’ She is currently Forty-eight years old. She is a Canadian Citizen by birth. In 2014, she became a United States citizen.

Samantha Bee was born Samantha Jamie Bee on October 25, 1969, in Toronto in Ontario, Canada. She was born to Ronald Bee and Debra Bee. She was brought up with her grandmother in Roncesvalles Avenue soon after her parent’s divorce. She attended a Catholic school.

Samantha Bee worked as a waitress in Toronto. She then started auditioning for acting roles. In 1995, she performed in Sailor Moon’s ‘A’ cast. She among other members founded ‘The Atomic Fireballs’ which was a sketch comedy troupe. In 2000, she appeared as a neighbor in ‘Real Kids, Real Adventures’ television show. In 2001, she featured in ‘The Endless Grind’ and ‘How I Am.’

In 2003, she made her debut in the renowned television, film ‘The Daily Show’ as a correspondent, a role she played until 2015. She also appeared in ‘Jasper, Texas’ television film as Kathy. In 2004, she made an appearance in her first starring film ‘Ham and Cheese’ as Beth Goodson. She also published ‘America; A Citizens Guide to Democracy Inaction.'

In 2005, her voice was used in a role in ‘Odd Job Jack’ as Linda Callahan. In 2006, she appeared as Carol Dulac in ‘Love Monkey. In 2007, she featured as a co-producer in ‘Not This but This.’ She also appeared in ‘Little Mosque on the Prairie,’ ‘Rescue Me’ and ‘Two Families’ and ‘Underdog.’ In 2008, she appeared as Nancy Cooper in ‘Coopers’ Camera’ and in ‘The Love Guru’ as Cinnabon Cashier. In 2009, she played a role in ‘Whatever Works’ and ‘Motherhood’ films.

She also features in ‘Date Night’ as the Woman in Times Square and ‘Furry Vengeance’ as principal Baker. She as well published her book ‘I Know I Am, But What Are You.’

In 2011, Samantha Bee featured in ‘Michael; Tuesday and Thursdays’ television film as Nancy Slade. In 2012, she performed in ‘Good God’ as Shandy Sommers. She also featured in ‘Bob’s Burgers’ as Pam’s and Nurse Liz’s voices a role played until 2017.

In 2013, she featured in ‘Bounty Hunters’ as Stacy’s voice, ‘Phineas and Ferb’ as the voice of Lyla Lolliberry and in ‘Creative Galaxy’ as Mom’s voice. In 2014, she appeared in ‘The Michael J. Fox Show,’ ‘Deadbeat’ show, ‘Learning to Drive’ film as Debbie. In 2015, she featured in ‘Halal in The Family’ as Wendy, ‘Game On’ as Gert, a role she held until 2016, ‘Get Squirrely’ as Ravitch's voice and in ‘Sisters’ as Liz.

In 2017, she appeared as herself in the television show ‘The History of Comedy.’ She at this time published ‘The Simple Vegan Recipe Book.’ In 2018, she features as Hazel’s voice in the film ‘Elliot the Littlest Reindeer.’

In 2015, she won the Canadian Comedy Person of the Year in Canadian Comedy Awards. In 2016, she won varieties of awards including; History making Award in Women’s Media center, Outstanding Achievement in News and Information and Individual Achievement in comedy in the Television Critics Association Awards and Best Variety Performer in the Gold Derby Awards.

In 2001, Samantha Bee got married to Jason Jones with whom she has three children. She is currently Forty-eight years old.