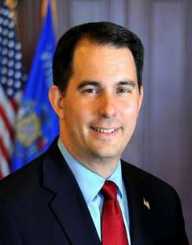 Scott Kevin Walker is an American philanthropist and politician. He is the only US Governor to survive a recall election vote.

Scott Kevin Walker was born in Colorado on 2nd November 1967. He was the eldest child of Llewellyn and Patricia Walker. He spent his early years in Colorado until the age of three. In 1970, Llewellyn moved his family to Iowa. They finally moved to Wisconsin in 1977.

He went to Delavan-Darien High School in Delavan, Wisconsin. Walker graduated from high school and enrolled at Marquette University. While in college, he worked as a part-time employee of the computer manufacturer IBM. Walker did not graduate from the college. He left his studies for a job at the American Red Cross Society.

From his early years in school, Walker showed an interest in public service. He was a leader in the local scout movement in Delavan. He represented the state in a scout competition in Washington D.C.

In college, he won the student senatorial seat in his first semester. He was the chief advocate of the Students for Life campaign group. They advocated the right of life of the unborn babies. He continued serving as the senator until 1998. Walker ran for the student president seat in 1998. He narrowly lost the race.

In 1990 Walker entered elective politics at the age of 22. He lost the Wisconsin State Assembly seat and lost to the Democrat incumbent. He later won in the 1993 race in a state that was heavily tilted to the Democrats. He successfully defended his seat in four successive elections. Walker proposed legislation that cut the fiscal spending of the state. He also rallied behind the reformation of the transport system in Wisconsin.

In 2002 Walker became the Milwaukee County Executive. He won the seat defeating the favorite Democrat candidate Chris Ament. He served at the office until 2010. Like in his earlier years, Walker favored reforms on budgetary cuts, pro-life campaigns, and transformation of the transport system within Milwaukee County.

After serving as Milwaukee County Executive, Walker ran for the governorship in Wisconsin. In November 2010 he was elected the 45th governor of the state of Wisconsin on a Republican ticket. A firm believer in budgetary cuts, Walker immediately embarked on fiscal cuts in Wisconsin. In 2011, he presented a bill that aimed at rescinding the collective bargaining agreements of the Wisconsin workers. Walker sparked partisan political tension and industrial action from workers unions. The Republicans carried the vote and made the changes. Walker envisaged a turnaround of the economy; instead, economic turmoil followed his actions. On June 14, 2011, the State Supreme Court upheld the cuts. Citizens petitioned for the governor to be recalled. Walker was recalled and subjected to a by-election. On June 5, 2012, Walker successfully retained his gubernatorial seat. He went into the annals of history as the first ever governor to reclaim a seat after a recall.

He continued on economic reforms aimed at revamping economic growth. Walker instituted changes that encompassed the private sector workers. While his party rejoiced in the changes, the Democrats reviled his administration for usurping powers and weakening the labor movement. At the turn of 2015, Walker faced a declining budget, high unemployment, and a weakened private sector. He served until 2019.

In the 2018 midterm elections, Walker vied and lost to Democrat Tony Evers for the Wisconsin gubernatorial seat. The Democrats reclaimed a seat that had eluded them for years. To political observers, Walker lost his seat for supporting US President Donald Trump. Yet in his traditional fashion, he enacted another law that seemed to curtail the operating powers of the incoming Democrat governor.

Walker his present wife married Tonette Walker on February 5, 1993. He has two sons, Matt and Alex. He is an active Christian at his local church.

He is a member of social and charitable organizations in Wisconsin. Walker supports the American Lung Association and the Trauma Informed Care. His favorite pass time is riding motorbikes.

Scott Walker served as State Governor without a college degree. He declined the medical use of marijuana and fought the pro-choice campaigns. He is also the only governor to retain a recall election.