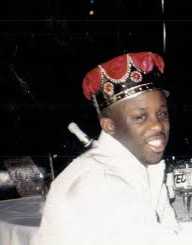 Midget Molley is an American organized crime leader and a drug lord.

Robert Edward Molley was born in Atlantic City on March 4, 1959. His father, Benjamin Franklin Molley, was a pastor at a Pentecostal church. His mother’s name was Helen Louise Molley. He had eight older siblings and three younger siblings. He grew up in a strict and religious household, spending a lot of time in church. When he was nine years old, his father died of brain cancer. His mother was often away from home, working in local hotels to support her family.

Because of his short stature, his family members jokingly referred to him as a midget. That nickname stuck with him throughout the years and he became known as Midget Molley.

At the age of 17, Midget Molley joined the Nation of Islam. He often attended Temple 10 in Atlantic City. The other members of the Nation of Islam called him Brother Robert 8X. A while later, he legally changed his name from Robert Edward Molley to Hakeem Abdul Shaheed.

After his father’s death, Midget Molley began spending plenty of time on the streets. He started doing small tasks for various local gangsters. At the age of 13, he stabbed someone during a group fight. Soon after that, he started working for a local heroin dealer. He greatly admired the drug lord Leroy “Nicky” Barnes. He bought drugs from New York City and distributed them on Kentucky Avenue in Atlantic City.

In 1980, the police convicted Molly of attempted murder. He entered Bayside State Prison for a ten-year sentence, but he was released after only six years. After leaving prison, he decided to clean up his act. He attended culinary school and began working as a chef in several restaurants.

Midget Molley soon went back to drug dealing. He bought cocaine from Angel Diaz Rivera of the Medellin Cartel in Colombia. He distributed it with Victor “Shorty” Hernandez and Lucy “Luz” Bertone. He operated all over New Jersey, New York, Georgia, and Maryland. He started a limousine service and a car wash, which he used for money laundering. He lived an extravagant lifestyle filled with partying and expensive clothes. He had a custom-made gold crown which was worth more than a million dollars.

In 1989, the U. S. Organized Crime Drug Enforcement Task Force arrested Midget Molley. They raided all of his business and drug fronts and arrested more than 20 of his distributors. The following year, he was sentenced to 19 years in federal prison. He initially served his time in Terra Haute, Indiana. He later got involved in a prison fight and was sent to Atlanta, Georgia. After that, he was sent to Leavenworth, Kansas. He finally ended up in Marion, Illinois, before being released in 2006.

At the age of 13, Midget Molley was involved in a fight in an apartment complex on Bacharach Avenue. One of the eyewitnesses was a girl named Elise. The two of them began dating and soon had two children, named Hakeema and Hakeem. In 1986, they got married and had a son named Haneef. Once his business began to flourish, Molley placed his family members in a mansion in the suburbs to shelter them from his crimes.

Writer Ali Rob wrote two biographies about Midget Molley, titled The Myth of Midget Molley and The Resurrection of a Legend.