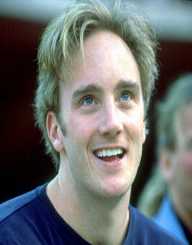 Jon Ferguson Cox “Jay” Mohr is an American actor, comedian, and radio host. Born on August 23, 1970, he is best known for his role in television series including playing Professor Rick Payne in Ghost Whisperer from 2006 and 2008 and in the CBS’s sitcom Gary Unmarried from 2008 to 2010.

In comedy, Jay Mohr was a cast member on the sketch comedy show, Saturday Night Live from 1993 to 1995. Jay Mohr was the host and executive producer of Last Comic Standing from 2003 to 2006. For his radio career, Mohrhosted the sports talk show, Jay Mohr Sports on Fox Sports Radio from September 2015 to January 2016. He currently hosts his podcast, Mohr Stories on the SModcast Network.

Jay Mohr was born on August 23, 1970, in Verona, New Jersey to Iva Jean (née Fergusonand Jon Wood Mohr. His father was a marketing executive and his mother a nurse. He is from an English, Scottish, Welsh, and German descendant. Mohr has two sisters Julia and Virginia. Raised as a Presbyterian, he later converted to Roman Catholic.

Jay Mohr started a career in comedy as a featured cast on Saturday Night Light seasons from 1993 to 1995. He recounts in his memoir, Gasping for Airtime: Two Years in the Trenches of Saturday Night Live, 2004 that he battled with chronic panic attacks while on the show.

Jay Mohr, however, credits Sarah Silverman, a co-star on SNL for helping him out during that period. He was the creator, host and executive producer of the reality television program, Last Comic Standing, aired on NBC in 2003 and 2004. The show aired for three seasons before it initially canceled due to poor ratings. The show was later revived for a season four, but Jay Mohr refused to return to the show as he saw the initial cancellation as unfair. Anthony Clark replaced him as the host.

Jay Mohr played the recurring role of Wayne, brother or Jeff Foxworthy in the first season of the television series The Jeff Foxworthy Show. Jay Mohr made a major film debut with the role of Bob Sugar in the film Jerry Maguire in 1996. He soon followed it with a starring role in Picture Perfect, 1997. Jay Mohr played the film producer Peter Dragon in the television series Action in 1999.

Jay Mohr then serves as a voice-over artist for Beyond the Glory by Fox Sports Net. He has appeared in films including The Groomsmen, Small Soldiers, Suicide Kings, Are We There Yet? and Pay it Forward. He starred as Gary Brooks, the title character for the CBS sitcom Gary Unmarried. Gary Brooks was a newly divorced man with Paula Marshall playing as his ex-wife. His also played Billy in the thriller film, Hereafter, in 2010. That same year he starred on NBC’s series Outlaw.

In 2001, he hosted the sports talk show, Jay Mohr Sports, in ESPN but was canceled later that year. ESPN’s Michael Eisner had previously offered Mohra late-night show by but opted for a radio show instead. He has frequently contributed and guest-hosted The Jim Rome Show. He has participated in Smack-Off on The Jim Rome Show on several occasions. He took the 7th position in 2007, 6th in 2008, 10th in 2009, 6th in 2010, and 6th the 2011 Smack-Off

Jay Mohr is also known to do "drive-by" call-ins to the show, typically to promote one of his stand-up shows or live events. He served as the host of the daily talk show Jay Mohr Sports on Fox Sports Radio starting from January 2, 2013, on the 12 to 3 p.m. (ET) timeslot. The timeslot was previously allotted to The Jim Rome Show, which was moved to CBS Sports Radio.

The Jay Mohr Sports moved to the 3 to 6 pm time slot on November 3, 2014. In 2016, he served as the host of the Los Angeles Rams pregame show, which aired on Saturday evening on KABC-TV. He was replaced the same year.

Podcasting And Other Works

Jay Mohr currently hosts his podcast show, Mohr Stories on his own network, Fake Mustache Studios. It was previously hosted on the SModcast Network but that changed since May 4, 2012. Jay Mohr released his first book Gasping for Airtime: Two Years in the Trenches of Saturday Night Live, in June 2004 published by Hyperion. Mohr’s second book, No Wonder My Parents Drank: Tales from a Stand-Up Dad was released in May 2010.

He has an album Happy and A Lot, which received a nomination for Grammy Award for Best Comedy Album at the 58th Annual Grammy. Mohr has also hosted events including the Monster Energy NASCAR Cup Series Awards Ceremony in Las Vegas since 2013.

Jay Mohr has married twice first to former model Nicole Chamberlain. They married for six years and had a son. He then married actress Nikki Cox on December 29, 2006. They have a son Meredith Daniel Mohr. Mohr has officially added his wife’s surname “Cox” to his after filing legal papers in December 2008 to change his name to Jon Ferguson Cox Mohr. On The Adam Carolla Show, on May 16, 2017, Mohr said he and his wife are "in the middle" of a divorce.