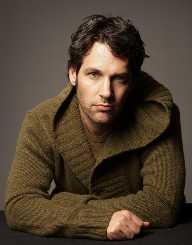 Paul Rudd is one of the teen sensations. He became this after his breakthrough role in Clueless, a comedy film. He later worked his way up by earning numerous roles before he became a star in somehit movie. The audience for his movie Anchorman knows him: Legend of Ron Burgundy and 40-Year-Old Virgin. He also has appeared in some televisions shows as well as dramas. He is also popular among both audience and other filmmakers as a mainstream actor in Hollywood. He is now a successful producer as well as a screenwriter in addition to his acting career.

He was born in Passaic, New Jersey, USA. He was born on 6 April 1969 to Jewish parents. He grew up in Overland Park, Kansas. He got educated at the Broadmoor Junior High School and Shawnee Mission West. He later attended the University of Kansas for two years where he studied drama. Soon, he attended British Drama Academy at the Oxford University for three months. While studying there, he participated in theatre productions.

As at 2009, Paul Rudd had established himself as one of the mainstream actors in the industry. Many people are always interested in getting him aboard their films. He was seen in 2009 film; I Love You, Man as Peter Klaven. He also played a voiced a character in the film, Monsters vs. Aliens. He has seen in the movies Dinner for Schmucks and How Do You know in 2010. A year later, he appeared in Bridesmaids and Our Idiot Brother. He soon acted and produced a movie, Wanderlust in 2012 before he acted in the critically acclaimed movie, The Perks of Being a Wallflower,  in 2013. Within that 2013, he also appeared in This is the End, All is Bright, and This is 40.

Paul Rudd has some works and movies to his name. However, there is a particular movie that is rated one of his best movies. He was first seen in the Movie, Clueless which was his first movie ever. Entertainment Weekly rated it as the 19th best comedy of the past 25 years. During the production of the movie, he also has a feeling that the comedy would be a successful one. The film was a major commercial success and sold millions of copies.

Paul Rudd won the San Diego Film Critics Society Awards in 2012 for his film The Perks of Being a Wallflower for his Best Ensemble Performance.

Paul Rudd has two children with Julie Yaeger whom he married in 2003. He is also a lover of baseball as he loves watching the sport. He is a fan of Kansas City Royal Baseball Team and also a member of Sigma Nu Fraternity. He had a son named Jack and a daughter named Darby. He seems to be a very responsible man who respects his family as there is no report of him having an extramarital affair with anyone. He so much loves his family and gives them his best. He is known to have a love of his former school at heart as he is known for visiting the school on a regular basis. He was also known by some people to be a former DJ at Bar Mitzvahs before he made it big as an actor and producer.