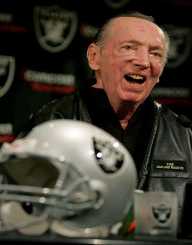 Born on July 4, 1929, Al Davis was an American football coach and administrator. From 1972 to 2011, he was the majority owner and manager of the Oakland Raiders of the National Football League. Al Davis previously served as the head coach of the team from 1963 to 1965 and then a co-owner from 1966 to 1971when the Raider was part of the American Football league. Around that period, Al Davis also served as the commissioner of the American Football League (AFL)  in 1966. Known for his motto "Just win, baby", Al Davis made Raiders one of the most successful National Football League (NFL) teams during his administration. During his term, Raiders won three Super Bowls titles.

Al Davis was also a strong civil right activist and prevented the team from playing in any city where black and white were segregated and black and white players were not allowed to stay in same hotels. Al Davis became the first team owner hire an African American as head coach and also a woman as chief executive. Al Davis made history in NFL by becoming the first person to serve as an assistant coach, head coach, general manager, commissioner, and owner of a team. In 1992, he was inducted into the Pro Football Hall of Fame.

Al Davis was born on July 4, 1929, in Brockton, Massachusetts to Louis Davis and Rose. He had a brother, Jerry. At age five, the family moved to Brooklyn,where he rented a sixth-floor walkup off Utica Avenue for the family. His father, who started trading general merchants finally gained success in garment trading. Growing up, Al Davis gained interest in basketball and became known as a hard player. With his interest, Al Davis was eager to play under Coach Al Baiden at the Erasmus Hall High School as he gained the opportunity to attend a school closer to his house. Davis was, however, not a first choice player for Baiden as Al Davis was always on the reserve side and played in fewer games. This situation did not prevent Davis from picking up Baidens coaching techniques and learned much from him. After graduating from high school in January 1947, Al Davis enrolled at the Wittenberg College in Springfield, Ohio aged 17. While there, he occupied himself with baseball throughout his days there.

Al Davis gained atransfer to Syracuse University in mid-1947. While there, Al Davis didn’t have enough playing time and always warmed the bench of the junior varsity baseball team. With this, Al Davis sought for a transfer to Hartwick College, New York in 1948 but his stay was just brief as he again returned to Syracuse University. After all unsuccessful try to join the men’s basketball team, Al Davis tried his luck in acquiring football strategy andtherefore attended the football team’s practicesto take notes. Al Davis also sat through academic courses in football strategy organized by assistant coaches for football players.

Al Davis graduated from the university with a Bachelor of Arts at age 20. While doing his master’s degree, he also pursued a career as a college football coach but was turned down by Hofstra University and Bill Altenberg who was the athletic director at Adelphi University. However, Al Davis personally went to Adelphi’s president to have a talk andafter some few minutes of leaving his office; Al Davis received a call from the president he had a new freshman football coach. After his master’s degree, Al Davis was drafted into the United States Army and luckily for him his coaching service was acquired by General Stanley of Fort Belvoir, Virginia for the post’s football squad in 1953.

Al Davis handled the Fort Belvoir team winning eight out of 10 games but missed the Poinsettia Bowl because they lost their last game to Quantico Marine Base. Al Davis was discharged from the militaryin 1954. Afterward, he worked for Baltimore Colts of the NFL as a freelance scout. His work as a scout paved the way for him to get an assistant coaching job at The Citadel in South Carolina with John Saur being the head coach in 1955.

In 1963, Al Davis successfully negotiated a three-year contract with Raidersfor $20,000 per annum after negotiations with Wayne Valley and McGah who were partners of Raiders. His negotiation included aside being the head coach would be the general manager with full control over football operations of the team. After taking over the team, he dismissed several players and front office employees. Al Davis then began to restructure Raiders to make it a championship team.

Al Davis signed players like All-AFL guard Bob Mischak and wide receiver, Art Powell. He structured the Raiders into a championship team and that paid off in the first season by finishing 10-4. At the end of the season, he was awarded the AFL Coach of the Year. Raiders became the only pro football team to improve its record with nine victories under the 14-game schedule in 1963. In the 1964 season they had 5–7–2 and 8–5–1 in the 1965 season. On April 8, 1966, Davis was voted as the AFL Commissioner to replace Joe Foss who had resigned a day before. He resigned his post on July 25, 1966, and also refused to become the AFL President after AFL merged with the NFL.

Al Davis formed the holding company, A.D Football, Inc after he resigned as a commissioner and returned to Raiders as one of the general partners with 10% stake in the team with other partners being Wayne Valley and McGah. Al Davis also became the head of football operations and coach. Al Davis was able to win the 1967 AFL Championship and won the Western Division titles the next two year. A new coach, John Madden was signed in 1969 to become Raider’s sixth head coach and worked under Al Davis. Raiders became the most successful NFL franchise by winning six division titles in the 1970s.

Al Davis successfully drafts a partnership agreement making him the new general managing partner while Valley was out for the 1972 Summer Olympics. Since McGah, signed it, it became binding under the California partnership law of the time. Valley unsuccessfully contested the new agreement in court upon his return so sold his interest in 1976. Davis in 2005 bought the 67% shares of the McGah family to become the owner. Davis was able to make Raiders the most successful team in all professional sports and won lots of titles.

Al Davis was married to Carol Sagal and were blessed with a child Mark. He died on October 8, 2011, aged 82 in Oakland, California in his suit at the Hilton Hotel Oakland Airport. He was interred at Chapel of the Chimes after nine days.

Al Davis had health issues as he underwent heart surgery in 1996 and had a throat surgery few days before his death. Al Davis also had issues with skin cancer. According to reports obtained by The Associated Press, Davis died from an abnormal heart rhythm, congestive heart failure, and a heart muscle disease.