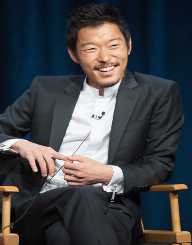 Aaron Yoo was born on May 12, 1979. He is an American actor and cinematographer. He is of Korean descent. When he was in University, he had pursued writing but he, later on, realized that he would be better in acting than writing. He entered into acting immediately after graduating college. He has appeared in movies such as ‘Disturbia’, ‘21’, and Friday the 13th’. He is also known for his character Russell in the science fiction series ‘The Tomorrow People’. He is one of the Koreans who have made his community proud in the United States of America.

Aaron Yoo was born on May 12, 1979, in East Brunswick Township, New Jersey. He was born to Korean parents. He was brought up alongside two siblings, a sister and a brother. He attended East Brunswick High School where he played the cello in the orchestra. He also ran track. In 2001, he graduated from the University of Pennsylvania. At the University he was a member of the Sigma Nu fraternity. Aaron Yoo ventured into acting immediately after college.

Aaron Yoo first appeared on television in a television series titled ‘Ed’ in 2003. He only appeared in one episode in the whole series. He, therefore, kick started his career in the series and he went on to appear in other television projects acting in minor roles. In 2007, he appeared in the horror movie ‘Disturbia’ which was a breakthrough for his career. He starred alongside Shia Lebeouf and the movie turned out to be a great success. The following year he starred in the movie ‘21’ where he acted alongside Academy Award winners Kevin Spacey and Laurence Fishburne. The movie became a major box office success even though it was criticized a lot by critics.

Aaron Yoo became famous to the general public and his career continued to flourish. In the same year also appeared in the movies ‘The Wackness’ and ‘Nick and Norah’s Infinite Playlist’. He co starred with Sir Be Kingsley in the movie ‘The Wackness’. In 2009, he also starred in the remake of the famous movie ‘Friday the 13th’. Before the shooting of the movie started, Aaron Yoo had undergone surgery, that is, the removal of his appendix surgically which prevented him from shooting his scenes immediately the shooting began. He was so determined to take part in the movie that he shot his scenes even before his wounds were completely healed. In the same year, he co starred in HBO’s ‘Rocket Science’ where Aaron Yoo played the role of Heston. He was also the lead role in the American science fiction television series ‘The Tomorrow People’ before it was cancelled after season one.

In 2008, Aaron Yoo shared the special Award for Best Ensemble for the movie ‘21’ along with other co stars such as Kevin Spacey, Laurence Fishburne, Liza Lapira, Kate Botsworth, Josh Gad, Jim Sturgess and Jacob Pitt.

Aaron Yoo married his girlfriend Farah Homidi who is a makeup artist on September 6, 2014. The wedding was just a small ceremony that was held in the presence of family, friends and the crew of the television series ‘The Tomorrow People’. He almost gave up on acting when he faced challenges at a workshop that he attended while he was still a student at the University of Pennsylvania. He is determined hardworking and optimistic that great things are yet to come his way.

Aaron Yoo is among the Koreans who have really made their community proud of their achievements. He loves spending time with his family and friends. He also has very supportive parents.