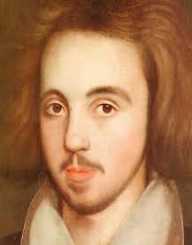 Christopher Marlowe was baptized on February 26, 1564, in Canterbury, Kent, England. He was a prominent figure during the Elizabeth era as a playwright, translator, and poet. He was a significant influence and inspiration to William Shakespeare who was also born in 1564. Shakespeare succeeded him as the Elizabethan playwright shortly after his sudden death.

He was arrested on May 18, 1593, on allegations of blasphemy and was tried before the court on May 20 the same year. He was to attend the court hearings until his case was proved otherwise, but he never lived to participate in the proceedings as he met his end ten days later. Ingram Frizer stabbed him to death on May 30, 1593, in Deptford, Kent.

Christopher Marlowe was baptized on February 26, 1564, and was the son of John Marlowe and Catherine. His actual date of birth is not in records but is supposed to be few days before his baptism.

He was born in Canterbury, Kent, England and went to The King’s School in his early teens. He later attended Corpus Christi College, Cambridge on a scholarship and graduated in 1584 with a Bachelor of Arts degree.

In 1587 after completing his master’s studies he was denied his Master of Arts degree. This was due to a rumor that he wanted to enroll at the English College, Rheims in preparation for his priesthood ordination. He was later granted his degree with intervention from the Privy Council who praised him for his excellent services to the Queen.

In 1587 Christopher Marlowe started writing plays for theatre performances while in London and also served in the government. ‘Dido, Queen of Carthage’ is believed to be the first play that he wrote which was published in 1594.

His first play to be performed in London in 1587 was titled ‘Tamburlaine the Great’ which was published in 1590. The play depicted the character Timur who rose from a mere shepherd to become a mighty warlord. This play was considered to be among his first English plays written in plain verses and performed on a regular stage.

Although scholars have differed in the order by which the subsequent plays were written, what stands out is their ideal manner in which they were written and the themes they portray. It is believed that ‘Doctor Faustus’ followed ‘Tamburlaine’ then ‘Edward the Second’ until the last one ‘The Jew of Malta.’ However, Marlowe’s society gave their chronology as ‘The Jew of Malta’ followed by ‘Doctor Faustus,’ ‘Edward the Second’ and lastly ‘The Massacre at Paris.’ All the four plays were written between 1589 and 1592.

‘The Jew of Malta’ originally known as ‘The Famous Tragedy of the Rich Jew of Malta’ talks about a rich Jew in the Island of Malta known as Barabas whose wealth was taken by the government. In his attempts to recover his wealth from the rulers he ends up being killed by the Maltese Soldiers. The play highlights different themes including religious conflict, intrigue, and revenge.

The play inspired Shakespeare’s work ‘The Merchant of Venice’ with Shylock depicting the character of Barabas. ‘The Jew of Malta’ in essence became one of his four last works with a portrayal of controversial themes.

‘Edward the Second’ depicts a weak and powerless King Edward II of England who is beguiled and overcome by his baron and the queen. ‘The Massacre at Paris’ is another work bearing controversial themes. It portrays the massacre of thousands of Protestants by the Catholic elites and French notables.

It highlights the events that prevailed on the fateful day known as Saint Bartholomew's Day Massacre of 1572. The last play titled ‘Doctor Faustus’ well known as ‘The Tragicall History of Doctor Faustus.’ The play depicts a man signing a deal with the devil by selling his soul to get power and knowledge in return. He is instead warned by a good Angel and proves himself as unable to repent which leads to his tragic end.

Christopher Marlowe was accused of using blasphemous words in his writings which were alleged as depicting atheism. He was arrested and brought before the court in 1593 on accounts of heresies and atheism which were vile offenses.

However, the court was unable to determine whether he was liable for punishment or not. The court released him but was expected to appear before the council on a daily basis. It was not long before he was stabbed to death ten days later by Ingram Frizer. He died on May 30, 1593, at the young age of twenty-nine in Deptford, Kent, England.