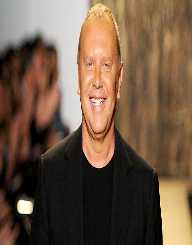 A fashion designer from Long Island, New York, Michael Kors is a talent judge on Project Runaway. Kors is a very established and respected designers with high-end clients such as Michelle Obama – the wife of former US President, Barrack Obama.

Michael Kors was born on August 9, 1959, in Long Island, New York. His birth name was Karl Anderson Jr., and his star sign is Leo. As an infant, Kors appeared in several TV commercials about products for babies and hygiene in general.

His parents divorced each other when Michael Kors was very young. His mother then married Bill Kors – a businessman. Anderson Jr. was asked by her mother to pick a new name for himself, and he went with Michael David Kors. Kors was genuinely interested in fashion right from his childhood. In interviews later, he would often recall how he impatiently waited for the Vogue to arrive. He was also a shopping addict. After finishing his early education, he decided to study fashion and shifted to New York City.

Michael Kors joined the Fashion Institute of Technology; however, he found himself learning more from the daily life of the city than the school. So he dropped out from school.

One of the first jobs that Michael Kors got was to work as a designer at the French boutique Lothar’s. The work he did there attracted fashion enthusiasts towards him, and in 1981 he was able to launch his Women’s Collection. His fashion line soon proved to be quite successful, and his designs were sold in Saks Fifth Avenue.

Michael Kors wasn’t just a sound designer. He was also an exceptional salesman who knew that his products were excellent. He did fashion shows called trunk shows throughout the US to popularize his clothing line. Such was his impact that editor Anna Wintour – from Vogue decided to look at his collection. He was only 23 years old then.

Before 1990, Michael Kors had exclusively served the high-end customers, but in 1990, he launched KORS Michael Kors. The price tag was significantly lower than before, and this low-end line became extremely popular. Seven years later, Kors became the creative director of Celine. He served there for six years.

As a judge on Project Runaway

In 2004, Michael Kors reluctantly agreed to judge on reality fashion show Project Runaway. He had his doubts about who would view the show. But, the show became a massive hit as soon as it was on the air. Freed from his doubts, Kors sat on the judges’ panel for several seasons before retiring from the show in 2012.

Today Michael Kors' net worth is over a billion dollars.

Michael Kors is openly gay and married to his partner Lance Le Pere. Just a few weeks after gay marriage became legal in New York, Kors married his longtime partner Lance La Pere, vice president of Michael Kors Women's Design in August 2011. The pair had first met in 1990 when La Pere was an intern at the company. They married in 2011 in Southampton, New York.