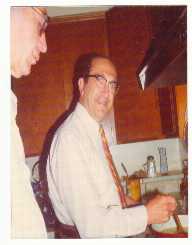 Salvatore Edoardo Luria was an Italian microbiologist and 1969 Nobel Prize winner in medicine. He shared the Prize with Alfred Hershey and Max Delbrück for their replication mechanism discovery. They also discover the genetic structures found in viruses. He took his fellowship study in the United States. By then Benito Mussolini ruled under a fascist regime and prohibited such kind of research for the Jews. During his career, Salvatore Luria opposed the idea of testing nuclear weapons.

The little information known on Salvatore Edoardo Luria’s early life is that he was born on August 13th, 1912. His place of birth was in Turin, Italy. He was the son of Davide Luria and Ester, a Sephardi Jewish Italian family.

Salvatore Luria began his studies in medicine in 1929 when he joined the University of Turin. He completed his studies in the University in 1935 and had his graduation. While studying at Turin, he met with Renato Dulbecco and Rita Levi-Montalcini who later became Nobel Prize winners in the field of medicine as well. He then joined the mandatory service in the Italian army in 1936. He worked there as a medical officer until 1937.

After his service in the army, he enrolled in the University of Rome. Here he studied radiology and found his interest in bacteriophages. The United States presented him a fellowship to study in their country. Unfortunately, Benito Mussolini’s fascist regime at the time prohibited Jews from fellowship studies. A disappointed Luria then moved to Paris in France. He again fled to the US in 1940 when Nazi German armies attacked France. While in the US he did his fellowship studies in Columbia University with the help of Enrico Fermi, a physicist.

Salvatore Luria began his research with two of his friends Alfred Hershey and Max Delbrück. Together they conducted experiments in the laboratory of Cold Spring Harbor. He also did other of his experiments at a laboratory owned by Max Delbrück at Vanderbilt University. Delbrück later enrolled Luria in a scientific group named American Phage Group. Here is when he became close to Delbrück, and together they conducted successful research on electron micrographs. In 1943 they called their experiment Luria–Delbrück, an experiment that explained the genetic mutations of bacteria.

In 1943 Salvatore Luria worked in the Indiana University as an assistant professor as well as an instructor. During this time he acquired his citizenship in the US as a naturalized citizen in 1947. He left the university years later in 1950 and took a job in the University of Illinois situated in Urbana, Champaign. He was a professor of microbiology at the University.

In 1959 Salvatore Luria was appointed as the chairperson of microbiology. This was at the Massachusetts Institute of Technology –MIT. He later became Sedgwick Professor at the institute in 1964 and chairperson of The Center for Cancer Research in 1972. He shared the Louisa Gross Horwitz Prize in 1969 with Delbrück. This was for their contributions to biology.

Apart from being a microbiologist, Salvatore Luria was also a great outspoken politician throughout his career life. He greatly advocated against testing of nuclear weapons. During the Vietnam War, he was a great critic of the war.

Luria was also an editor and author during his career life. He was an editor for Journal of Molecular Biology, Journal of Bacteriology and Proceedings of the National Academy of Sciences among others. In 1953 he wrote the book General Virology and Life: The Unfinished Experiment in 1973. In 1991 he was awarded the National Medal of Science.

Salvatore Luria tied the knot with Zella Hurwitz in 1945.  They were blessed with a son, Daniel.

At the age of 78, Salvatore Edoardo Luria had a heart attack and passed away.  He died on February 6th, 1991.