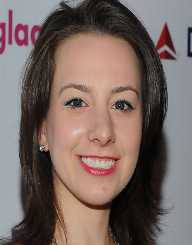 Sarah Elizabeth Hughes was born in Great Neck, New York on May 2, 1985. Her father, John Hughes, was a not only a hockey player but also served as the team captain of Conell University. Her older siblings were also involved in the sport especially her older brothers while her sister enjoyed figure skating. Following the call of the rink and her father’s footsteps, she stepped on the rink as well.

Sarah Hughes started skating at just three years old, and her love for the sport developed even more as she grew older. The more she skated, the better she became at it.

Under the tutelage of Coach Robin Wagner, Hughes went on to compete in various competitions. During the 1997-1998 Season of the 1998 US Championships, Hughes took home the Junior Title award. From there, the long string of victories ensued.

Up to the event that led her a spot in the 2002 Olympics, Sarah Hughes competed in Grand Prix of Figure Skating Finals’ 2000-2001 Season where she attained the bronze medal. Following her achievement at the Grand Prix, she competed and won at the 2001 US Championships. She was awarded the silver medal for the said event. Hughes attained her second bronze medal at the 2002 US Championships.

At the 2002 Olympic Games in Salt Lake City, Hughes was the dark horse that took home the gold medal in the ladies’ singles’ category. She beat the anticipated winner and crowd favorite, Michelle Kwan. This made Hughes the youngest Olympic Gold Medallist at the age of 16 years old. She is also the sole Olympic medallist who won without a Word Title nor a US Senior title.

In later years, Sarah Hughes continued to play the sport but never came near the title as she suffered an injury from practice. Eventually, Hughes left the rink and took to completing her studies instead.

Sarah Hughes is a breast cancer awareness advocate, due to the fact that her mother, Amy Pastarnack, was diagnosed with the sickness. Hughes went and suffered emotional turmoil at the time since she was training for the national junior championship at the time. Despite the stress, Hughes pressed on with skiing and managed to win the title in 1998 and her mother’s cancer went into remission.

She also exerted efforts on the Figure Skating in Harlem program, wherein tutorials and educational tutoring were provided for young girls in New York City’s Harlem community. Aside from that, she also extended a hand to Skate for Hope. Skate for Hope is dedicated to raising funds for breast cancer research and awareness by holding skating competitions.

Since Sarah Hughes never came as close as she once did in her prime, Hughes pushed her efforts to other concerns. For one, she continued her education at Yale University and graduated in 2009 with a degree in American Studies. She is also an alumnus at Pennsylvania Law School.