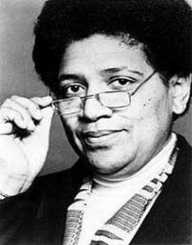 Audre Lorde was born to Frederick Byron Lorde and Linda Gertrude Belmar Lorde on February 18, 1934. Her parents migrated to USA from Caribbean and settled in Harlem. Phyllis and Helen were the two sisters of Audre Lorde. Her sight was a drawback for her as she suffered from short-sightedness.

Audre attended Catholic school at Manhattan. She obtained a degree in Bachelor of Arts from Hunter College in 1959. She also studied library science and did odd jobs to financially maintain herself. Audre studied one year in the National University of Mexico. She established as a lesbian and a poet. The then joined a college in New York to work as a librarian.

Audre pursed her studies at the Columbia University to obtain a Master’s degree in library science in 1961.

Audre’s first poem which she wrote when she was in the school was published in the Seventeen Magazine. Her literary work continued. Also, she took part in gay philosophy of Greenwich village. She remained alone after her studies.

Audre first joined the Mount Vernon Public Library in 1961 and later joined Town School Library in New York in 1966 to manage the library independently. She continued in this occupation till 1968.

The First Cities, her first volume of poems was published in 1968. Audre realized her teaching interest when she worked for Tougaloo College in Mississippi.

She authored Cables to Rage in 1970. The theme of this publication pertained to love, disloyalty, difficulties of raising children. Her other publication, From a Land Where Other People Live, dealt with problems of international prejudice and coercion. She also touched upon the difficulties covering her existence as an African American and more than that as a woman. This book won the nomination for National Book Award.

Audre continued authoring poem and prose collections. The Chosen Poems Old and New and Our Dead Behind Us were published in 1982 and 1986 respectively. These publications were appreciated extensively and strident reproach.

Audre’s first collection of prose explaining her fight with cancer, The Cancer Journals won the Gay Caucus Book of the Year Award in 1981.

Another prose, A Burst of Light published in 1988 was selected for National Book Award.

Audre accepted an academic visiting assignment in Berlin, Germany at the Free University of Berlin in 1984. She participated in the Afro-German programme. She stimulated women at Germany to avoiding fighting and speak up.

Two associations viz., Kitchen Table: Women of Color Press and Sisters in Support in South Africa were founded to address the fears of women.

She was New York poet laureate during for two years from 1991.

Audre was critical about many women activists for their limited knowledge based on white conventional women.

Lorde married Edwin Rollins in 1962. He was an advocate. They had two children by this marriage – Elizabeth and Jonathan. They separated in 1970.

Lorde had a partnership with Frances Clayton, professor of psychology till 1989. She had a brief affair with Mildred Thompson.

Before her death, she assumed the name Gambda Adis meaning Warrior – she who makes her meaning known.

She was suffering from breast cancer and fought for 14 years against cancer. She died on November 17, 1992, in US Virgin Islands at the age of 58.