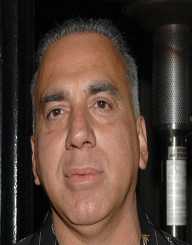 Ruben was born December 28, 1956, at Cook County Hospital, Chicago but was raised in Highland Park, California.  He has one brother, Al “the Suit” Cavazos.  His father was Alvaro Cavazos and his mother was Lindo Romo, of German/Spanish/Irish immigrants. His mother left him and his family when he was two years old and she lives in Southern Texas.   His father worked the fields in Texas until there was no more work to be had; at which point, he packed up his two sons and drove to Los Angeles. The started out living with family.  While there he started attending Loreto Elementary School on Arroyo Seco Avenue.  He fought a lot in school.

When he was in fourth grade, his family moved to Ulysses Street where it was known to have a lot of gang activity.  He joined the Avenues, a Latin Gang affiliated with the Mexican Mafia at either age 11 or 12 after having a fight with another gang.  Most of the gangs that were Latin were called Surenos.  He didn’t last long because he got arrested and served time in county jail.  Then he found out about the Mongols a motorcycle gang.

Although the Hell’s Angels had most if not all of California in its grasp, Ruben Cavazos decided to join the Mongol Nation and quickly became well-known in the organization.  He was good at recruiting new members into a decimated by a law coup that happened just before he joined. His new membership recruits came from his own neighborhood.  Mostly men who had left the Surenos to join the Mongol Nation. They were different than the normal recruits brought it. They had less allegiance to their previous gang and loved to fight.  A lot of the members participated in bombings, shootings and were also military trained.

Due to the criminal activity that surrounded the actions of the Mongols, the federal government took notice and sent in undercover agents to infiltrate the motorcycle gang. One such recruit was Billy Queen who had went undercover in 1998. He stayed there as a patch-wearing member for three years.  He became the secretary of the gang and began to handle all of their books.  He knew where the skeletons were buried.  This helped when the federal government came to arrest the group in May 2000 with approximately 700 federal agents in an action that crossed four states. All in all, when the day was done, 54 Mongols ended up in prison for various criminal activities.

Ruben Cavazos rose to power quickly in the motorcycle gang.  The reason was he brought in a lot of recruits and they were loyal to him.  But he was power hungry and wanted it all.  He didn’t mind a little violence nor did he mind giving a good fight to the Hell’s Angels. In fact, he encouraged that it was stated.  He became known as the Mongol Warlord to some and as Ruben “Doc” Cavazos to others.

But as the time when on, the feud between the Mongols and the Hell’s Angels began to erupt more and more into violence.  One such incident occurred on April 2, 2002, at an event called the Laughlin River Run in Laughlin Nevada.  It was an event sponsored by the Hell’s Angels and lasted for five days.  Bikers from all around the country all gathered to have fun at Nevada’s playgrounds.  But on this day, police found a dead body lying slightly away from a downed Harley Davidson. A young man was shot in the back, a Hell’s Angel named Christian Tate along the Interstate 40 in Nevada.   At this same time, the Angels and the Mongols who were known for having a beef with each other started fighting at the Laughlin River Run.

At the beginning of the even then-President, Roger Pinney attempted to arrange peach with the Hells Angels so that both motorcycle gangs could enjoy the festival.  But this was a short-lived respite.  Another Hell’s Angel had a different idea.  Ray Foakes came into the event looking to fight.  He kicked a Mongol member in the chest which of course started a fight.  It was a free-for-all.  At the end of the fight, three members of one of the gangs or both gangs were dead and 13 others were hospitalized including then-President Roger Pinney.  Who remained unscathed, however, was Ruben Cavazos.  He was Pinney’s right-hand man and supposed to protect him but he ran when Pinney was down after being injured. Pinney almost didn’t survive, but he did survive. This was when Ruben seized power because someone had to step up to fill the void that having their president injured left the group in.

Prior to the April event in October 2000, another major fight had broken out between the two parties.  It was at the Orange County Fair in Costa Mesos. Once again a melee happened. This, however, didn’t stop Ruben from attempting to make the Mongols one of the most feared and largest motorcycle gangs in all of the state of California.

In 2005, several federal agencies including ATF, joined forces to infiltrate the Mongol Nation and to take down its leadership. The group was now known for murder, theft as well as racketeering and other RICO violations. And at the helm of the group supervising it all was Ruben Cavazos. Several of the agents became patch-wearing members, at least seven. No one knew how that occurred, but it was because Ruben wanted power and they helped him get it all the while gathering evidence to perpetrate one of the biggest busts in RICO history. In May 200 ATF agents launched a raid that netted them more than 50 members in an arrest for various crimes. The action crossed six states to catch the members.

What followed was the arrest of Ruben Cavazos and other members of the motorcycle gang that resulted in an 86 count indictment brought down against them.  Included with the indictment was a request to take both the name and the logo from the Mongol Nation.  In the end, Ruben and several others pleaded guilty to charges and received sentencing. While this was going on he was voted out of the Mongols on August 30, 2008, in Vernon, California.

Ruben had one son Ruben “Lil Rubes” Cavazos Jr, who was with him when he was arrested once.