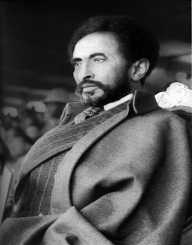 Haile Selassie, I was born on July 23, 1892, in Ejersa Gora. His birth name was Lij Tafari Makonnen, and he was the son of Ras Makonnen, who was the governor of Harar. His father’s cousin was the Emperor Menelik II, but he did not have a male heir. When Selassie’s father died, he was taken under the wing of Menelik.

When Menelik II passed away in 1913, his grandson Lij Yasu was appointed the emperor. However, Yasu, who was associated with Islam in the majority Christian population failed to gain public liking. For this reason, Tafari became the face of opposition and in 1916 took power from Yasu. After this, Yasu was imprisoned for the rest of his life. Menelik II’s daughter was appointed the empress, and she made Tafari her regent and heir apparent to the throne.

Tafari became the symbol for Ethiopia’s youth, and in 1923, he led the country to the League of Nations. He traveled abroad to Europe, becoming the first Ethiopian ruler to leave the country for such purposes. In 1928, Tafari became the king, and two years later, after the empress died, he became the emperor and assumed the name, Haile Selassie. After gaining complete power, Selassie began working on strengthening schools and the police. He centralized the power and instituted a new constitution.

In 1936, Italy invaded Ethiopia and Selassie was exiled. After this, he went before the League of Nations and asked for assistance to regain control in Ethiopia. Haile Selassie managed to secure help from Great Britain and was reinstated to his powers in 1941. In 1955, Selassie granted a new constitution which outlined equal rights for the citizens. However, the constitution did not diminish his powers.

By 1970s, the country was struck by worsening unemployment and famine. The people began to grow frustrated towards the government, and it undermined Selassie’s rule. In 1974, several mutinies broke out in the army, and the secessionist guerrilla war in Eritrea worsened the problems.

In 1975, Selassie was taken down from his throne following a coup and was held under a house arrest until his death the same year. It was initially announced that he died of natural causes, but later investigation revealed that he was most likely strangled on orders of the new government. His remains were discovered in 1992 under a toilet in the Imperial Palace. Selassie was buried correctly in 2000.