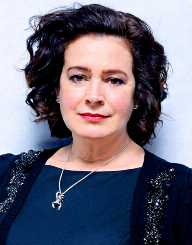 American actress Sean Young was born on the 20 November 1959 in Louisville, Kentucky to Lee Guthrie, a screenwriter, and journalist, and Donald Young, Jr., an Emmy Award-winning television news producer and journalist. Young has a sister Cathleen, who is a screenwriter and a brother, David Young III.

Sean Young studied at Cleveland Heights High School in Ohio before enrolling at the Interlochen Arts Academy in Michigan. She also studied dance at the School of American Ballet, New York.

Sean Young worked as a model and was also a trained ballet dancer before she made her film debut in Jane Austen in Manhattan in 1980.

Sean Young has been appearing in regional theatre productions in New York and has recently being cast in cop series The Fifth Boro with Tara Reid. The series will be directed by Steven Stanulis, a former cop who was at one time Kanye West’s bodyguard.

At the Oldenburg Film Festival in 2012, Sean Young was presented with a Star of Excellence Walk of Fame award.

In 2014 at the Shockfest Film Festival, Young was nominated for a Best Actress Award for Crazy Town (2013).

Sean Young and Robert Lujan married in 1990. They had two sons before divorcing in 2002. Then in 2011, the couple remarried.

Sean Young has had issues with alcoholism and has spent time in rehab.

Sean Young has had a share of controversies including being accused of stalking her actor James Wood in 1988. She was the subject of a citizen’s arrest at the Vanity Fair Oscar party in 2006 and recently was accused of stealing $5,000 laptops and equipment from a film set. Her role was cut out of Wall Street by the director Oliver Stone, and she was later from the set of Dick Tracy in 1989 with director Warren Beatty claiming that Sean Young was not maternal enough for the role of Tracy’s girlfriend, Tess.

Sean Young contended that Beatty fired her because she had rejected him. There was also a lot of controversy surrounding Young’s wish to be cast as Catwoman in the Batman sequel. She dressed up in a Catwoman costume and went into Warner Bros, attempting to convince Burton that she was perfect for the role. After he hid under his desk to deter her, she was included in Hollywood.