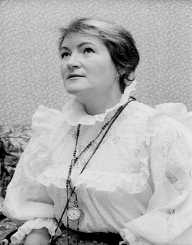 Laura Mountney was born on 7th September 1925, to Stanley and Margaret Mountney. Although her parents lived in England, Ashley’s mother returned to Wales so Laura could be born there. Margaret Mountney stayed with her mother during the birth period.

In Ashley’s younger schooling years, she was educated at Marshall’s School in Wales, until 1932. She attended school in England after that, at Elmwood School in Croydon. When World War II broke out, Ashley was evacuated back to Wales, but with so many others also trying to escape the war, she was unable to find placement in school. She was 13 years old and began schooling at Aberdare Secretarial School.

In 1942, Ashley left school. She enrolled in the Women’s Royal Naval Service at the age of 16.

Laura Ashley served in the Women’s Royal Naval Service for three years, after which time she was employed by the National Federation of Women’s Institute as a secretary. She worked at the Institute from 1945 to 1952.

While Laura was still working at the Women’s Institute as a secretary, Ashley became involved in some work on quilting. She had learned this craft as a youngster from her grandmother, and a renewed interest saw her designing headscarves, table mats, tea towels and table napkins. Bernard had designed a printing machine which was set up in the attic of their flat, and that was where he did the printing of the fabrics.

Whilst Laura Ashley was doing her patchwork, Ashley searched for small patches of fabric that had Victorian designs, but soon found out they didn’t exist. Being the entrepreneur that she was, she saw it as an opportunity, and with Bernard printing, the fabric for her, Ashley’s first products were Victorian style headscarves.

The scarves were a huge success. They sold by mail order, and in shops. The success grew to the point where Bernard left his job to concentrate on printing the fabrics on a full-time basis.

The company was initially called Ashley Mountney, but Bernard changed it to Laura Ashley. He felt a woman’s name would be more indicative of the products they were selling. In 1955, they moved the company to Kent, but in 1960 they moved to Wales.

Ashley’s first shop was opened in Machynlleth in 1961. By this time, she was raising three of her four children. Ashley had a seamstress with her at the shop, and she began to experiment with clothing as well. In the years that followed, they moved several times within Wales with their shop.

The Laura Ashley brand is, perhaps, one of the most recognized brand names in the world. It is synonymous with English charm and Victorian fabrics in both clothes and home furnishings, and shops are located all over the world, in prominent positions and major shopping malls.

Laura Ashley was awarded an OBE in 1975, but she turned it down. She thought her husband should have been offered one of his achievements in the company, and it upset her that he hadn’t been recognized. Bernard was eventually awarded a knighthood himself, but not until after Ashely died.

While Laura Ashley was serving in the Women’s Royal Naval Service, Ashley met Bernard Ashley. Bernard was stationed in India after the war, but the two continued to keep in touch by letter writing. When Bernard returned to London, the two married in 1949.

They had four children, Jane, Nick, David, and Emma. All four children were involved in the business – it was a real family affair. Jane did the photography for the company, David designed the shops, and Emma and Nick were both on the fashion design team. Bernard chaired the company, and Ashley herself watched the fabrics to make sure they were of the right quality.

The family managed their money well and had several pieces of the prime real estate in Europe, as well as their private plane.

In 1985, whilst visiting her daughter, Laura Ashley fell down a flight of stairs. She died in hospital ten days later from a brain hemorrhage. Bernard passed away in 2009 from cancer.

The company, Laura Ashley Holdings, went public in 1985, shortly after Ashley’s death. It was substantially oversubscribed.

The family’s former home in Cambridge Street, Pimlico, carries a memorial plaque in honor of Laura and was unveiled in 1994.

In 1987, The Laura Ashley Foundation was set up by Bernard in honor of his wife. The Foundation helps individuals realize their potential and talent. The family is actively involved in the Foundation’s operations, and day-to-day running.