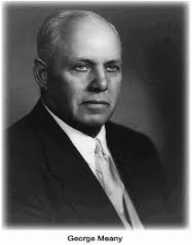 William George Meany was born on August 16, 1894, in Harlem, New York. His father, Michael, was a plumber and a supporter of the trade union movement. His mother’s name was Anne. He had nine siblings. When he was five years old, he and his family moved to The Bronx. He dropped out of high school at the age of sixteen and started working as a plumber’s helper.

He spent the next five years serving as an apprentice. He became a certified plumber in 1917. After his father’s death, he became the sole provider for his mother and younger siblings.

In 1920, William George Meany became a member of the board of executives of Local 463 of the Plumber’s Union. Two years later, he stopped working as a plumber and became a business agent for Local 463. In 1923, he became a secretary for the Building Trades Council of New York City. He was elected president of the New York State Federation of Labor in 1934. Two years later, he became one of the three co-founders of the American Labor Party.

In 1939, Meany moved to Washington, D. C. He joined the American Federation of Labor as a secretary-treasurer. During World War II, he took part in the National War Labor Board. In 1952, he became the president of the AFL. He started his attempts to merge the AFL with the Congress of Industrial Organizations. He finally succeeded in 1955, and he was elected president of the AFL-CIO. It became the largest trade union in the United States.

William George Meany fought against corrupt unions, such as the International Longshoremen’s Association, the United Textile Workers of America, the International Brotherhood of Teamsters, the Bakers and Confectionery Workers International Union, and others. He fought for universal health care and a higher minimum wage. He supported the Vietnam War and met with Presidents Lyndon B. Johnson and Richard Nixon. He retired from the AFL-CIO at the age of 84.

In 1979, George Meany injured his knee during a game of golf and was confined to a wheelchair. He passed away from a heart attack on January 10, 1980, at the George Washington University Hospital. He was 85 years old. His body was buried in Silver Spring, Maryland, at the Gate of Heaven Cemetery.

In 1963, President Lyndon B. Johnson gave Meany the Presidential Medal of Freedom. In 1974, the Boy Scouts of America established the George Meany Award. That same year, Meany opened up the George Meany Center for Labor Studies. The institution was later renamed to the National Labor College. In 1972, Joseph C. Goulden wrote the biography Meany: The Unchallenged Strongman of American Labor. In 1981, Archie Robinson published George Meany and His Times: A Biography. In 1994, The Simpsons featured Meany’s character during the episode “Bart of Darkness”.

That same year, the U. S. Post released a commemorative postage stamp featuring Meany. In 2000, historian David Brody wrote about Meany in the American National Biography. In 2012, Meany was referenced in the historical drama film Argo.