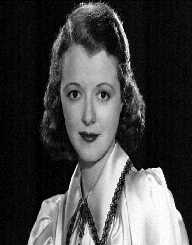 Janet Gaynor was an American actress who is best known for being the first winner of the Academy Award for Best Actress in 1929 which she received for her performances in three films.

Janet Gaynor was born on 6 October 1906 in Germantown, Philadelphia as Laura Augusta Gainor. Her parents were Laura née Buhl and Frank Gainor. Her father worked in theatre as painter and paperhanger. He taught the young Gaynor to sing and dance and fostered a love of performing. Gaynor began acting in school productions as a child. Her parents divorced in 1914 and Gaynor moved with her mother to Chicago. When her mother remarried, she moved with her and her stepfather, Harry Jones, to San Francisco. There she attended the San Francisco Polytechnic High School.

Janet Gaynor graduated in 1923 and went to Florida to work on stage. Her mother and stepfather moved to Los Angeles, and Gaynor returned to the West Coast to join them. She initially worked in a shoe store, but soon found work with Universal Studios and other film studios. Gaynor received work in some short films and some minor extra work in feature-length productions. She was hired by Universal Studios as a stock extra and given a wage of fifty dollars a week. Less than two months after being hired by Universal Gaynor received an offer from Fox Film Corporation to audition.

Janet Gaynor had appeared in some uncredited roles since 1924, but her first credited role came in 1926 in the film, The Johnstown Flood. Gaynor played a supporting role in the film, but it was enough to earn her a five-year contract with Fox Film Studios. Although she appeared in more uncredited roles within two years, Gaynor was one of Hollywood’s leading actresses. In 1927 she appeared in, 7th Heaven and Sunrise, these two films, along with 1928’s Street Angel, saw Gaynor receive the 1929 Academy Award for Best Actress. The win saw Gaynor hold the record for youngest Best Actress winner until 1986. Gaynor’s talent allowed her to transition from silent films to sound films seamlessly. She appeared with Charles Farrell in the musical, Sunny Side Up, in 1930.

Gaynor had also starred with Farrell in 7th Heaven and Street Angel. The pair would appear in twelve films together and were popularly referred to as ‘America’s favorite lovebirds.’ During the 1930s, Gaynor became Hollywood’s most profitable leading lady, with her films being the biggest draws in the country. In 1935, she starred alongside Henry Fonda in; The Farmer Takes a Wife. However, the same year Fox Film Corporation merged with Twentieth Century Pictures to create 20th Century Fox. The merger brought new in-studio competition from actresses, Shirley Temple and Loretta Young. She held out for an improved contract with the new studio, but her star began to wane. She starred with Loretta Young in the 1937 film, Ladies in Love.

Gaynor became frustrated with the roles she was receiving from the studio and considered retirement. She instead went to work with David Selznick and their first collaboration was in the film, A Star is Born. The film was a success and saw Gaynor receive critical praise for her performance. Although the film propelled Gaynor back to the top, she would retire a year later after appearing in just two more films. Gaynor at the age of thirty-three wished to retire on top having spent seventeen years acting.

Gaynor would return to acting in the 1950s, appearing in television anthologies and some stage productions. Her last film role came in 1957 when she appeared in the musical, Bernadine. She made her Broadway debut in 1980 as Maude in, Harold and Maude. Her final acting work came in 1982 when she toured with the play, On Golden Pond.

Janet Gaynor married Jesse Peck in 1929, and they separated in 1932. She married the costume designer Adrian Greenberg in 1939. Although it was an open secret that Adrian was a homosexual the couple had a daughter, Robin Gaynor Adrian. The marriage ended when Adrian died in 1959. In 1964, she married Paul Gregory, and the pair split their time between California and Brazil. They were close to Mary Martin and Richard Halliday. The two couples both lives in Brazil for a time. Martin, Gregory, Gaynor and Ben Washer were involved in a car accident in 1982.

A drunk driver and Ben Washer struck the vehicle they were driving in was killed, and the other occupants of the car was grievously injured. Gaynor was hospitalized for four months after suffering eleven broken bones and injuries to her lung, kidneys, and bladder. She never recovered fully, and her doctor attributed her death on 14 September 1984 to the injuries from the car accident.