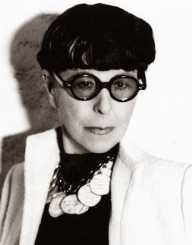 Edith Head was born Edith Claire Posener on the 28 October 1897 in San Bernardino, California. Her parents were Max Posener and Anna Levy.

Edith Head obtained a BA degree from the University of California (1919). She then did an M.A. at Stanford University (1920).  She also studied at the Otis Institute and the Chouinard Art School.

Initially, Edith Head worked as a French teacher. Then in 1923, she took up an apprenticeship in the design department at Paramount Studios. She progressed from sketcher to costume designer. Later in 1938, she was appointed Head Designer. And in 1949, won an Academy Award for The Heiress, the first of eight Academy Awards she would receive.

In 1950, Edith Head won an Academy Award for The Heiress (1949), the first of eight Academy Awards she would go on to receive. She remained with Paramount Studios until 1967, then worked at Universal Studios for the rest of her career. Other films she designed for include Samson and Delilah, All About Eve, A Place in the Sun, Roman Holiday, Sabrina, The Greatest Show on Earth, The Ten Commandments, Funny Face, Butch Cassidy, and the Sundance Kid, Airport, Pepe and The Sting.

Head worked with the leading actors of the day including Rita Hayworth, Audrey Hepburn, Elizabeth Taylor, Marlene Dietrich, Bette Davis, Ingrid Bergman, Marilyn Monroe, Grace Kelly, Olivia de Havilland, Paul Newman, Cary Grant John Wayne, and Steve McQueen. Her career in Hollywood spanned five decades, and she was involved in over 1,000 films, won 8 Oscar awards and was nominated for 35. She was the author of two books: an autobiography, The Dress Doctor (1959) and How to Dress for Success (1967).