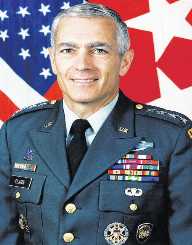 Wesley Clark, given name Wesley Kanne, was born on December 23, 1944, in Chicago, Illinois, United States of America. Clark was born to a Jewish father, Benjamin Kanne, and a Methodist mother, Veneta Kanne (nee Updegraff). Clark’s father Benjamin passed away just before Clark’s fourth birthday, in December 1948, at which point Clark’s mother moved the family from their Chicago home to Little Rock, Arkansas to be closer to her family.

Clark’s mother married again, this time to Viktor Clark, who acted as a father figure to Clark, even officially adopting Wesley on his 16th birthday. With the adoption, Wesley’s name was changed from Wesley Kanne to Wesley Kanne Clark, and his birth certificate was updated to reflect the change. This is something that, later in life, Clark lamented and regretted.

Wesley Clark was unaware of his Jewish ancestry throughout his childhood, as his mother hid this from him to protect him from the Anti-Semitic sentiments of the Ku Klux Klan hate group. The group was particularly anti-Jewish in the southern United States where Clark spent most of his childhood.

Clark graduated as Valedictorian of West Point and went on to earn his Master’s degree in Philosophy, Politics, and Economics (PPE) at Oxford University. While at Oxford, Clark learned of his Jewish lineage from an English cousin.

After his time at Oxford, Wesley Clark spent time at Fort Knox in the Armor Officer Basic Course. After completing Ranger School at Fort Benning, Clark earned a promotion to captain and served as commander of the A Company of the 4th Battalion, 68th Armor, 82nd Airborne Division at Fort Bragg, North Carolina.

In 1967, Clark married his first wife, Gertrude Kingston, later converting to her religion of Catholicism.

Wesley Clark worked as a staff officer during the Vietnam War, having first travelled to Vietnam on May 21, 1969. Clark was assigned to the 1st Infantry Division, and mainly helped gather data and intelligence as well as planning strategy for the company. Clark earned a Bronze Star for his involvement in this work.

By January 1970, Clark had moved to a command position of the A Company, 1st Battalion, 16th Infantry of the 1st Infantry Division. Clark was shot four times by a Viet Cong soldier about one month into a new position as commander. He was sent back to the United States to recover, spending this time at the Valley Forge Army Hospital in Phoenixville, Pennsylvania. He was able to meet his infant son, Wesley Clark Junior, for the first time during his recovery.

After his recovery at the Valley Forge Army Hospital, Wesley Clark moved on to command the C Company, 6th Battalion, 32nd Armor, 194th Armored Brigade at Fort Knox. This company, comprised entirely of wounded soldiers, is what pushed Clark to extend his military career beyond the required five-year term.

Clark worked in the office of the Army Chief of Staff in Washington D.C. from May 1971 to July 1971. It was his first foray into an official military post. Clark continued to serve as an Army Commander, and later Army General beginning in 1992. In 1997, Clark was appointed as the Supreme Allied Commander Europe of NATO, a post which he held until his retirement.

Wesley Clark retired from the Army in May 2000 after 38 years of service. Some speculate that Clark was “forced” to retire due to his strained relationships with American political officials across both political parties.

Wesley Clark began his retirement from the Army by entering the business world. He took a position with the Stephens Group, an investment firm in his hometown of Little Rock, Arkansas. He eventually left the Stephens Group to form his firm, Wesley K. Clark, and Associates.

Beginning with the 2000 Presidential Election, Clark became more involved in politics. Clark served as a defense commentator on CNN, supporting the War in Afghanistan as a response to the September 11 terrorist attacks in 2001, but denouncing the Iraq War. He began to align himself more closely with the Democratic Party, eventually considering a bid in the 2004 Presidential Election.

Though some speculated that Wesley Clark was only aligned with the Democratic Party due to tension between himself and Republican Party, he continued to his run for President in 2004. He eventually lost the nomination to fellow veteran John Kerry, who Clark supported during the final stages of the race.

It was speculated that Clark would run for President again in 2008, but this was later confirmed false when Clark endorsed Hillary Clinton, then supporting Barack Obama when he was nominated as the Democratic candidate following primary season.

Wesley Clark has not made a second run for President, though he has continued to speak out against the current Republican administration through the press and social media. In 2013, Clark and his wife Gertrude divorced.

Wesley Clark has been awarded a plethora of honors, knighthoods, military service awards and civilian awards both in the United States and internationally. Two of the most notable honors Clark has been given include the Presidential Medal of Freedom and Honorary Knight Commander of the Most Excellent Order of the British Empire, both of which he was presented in 2000. He also received the Defense Distinguished Service Medal as well as a Silver and Bronze Star. Beyond awards, Clark also has several streets and buildings named in his honor both in the United States and abroad.