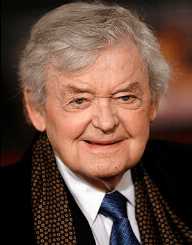 American actor Hal Holbrook was born Harold Rowe Holbrook Jr. on the 17 February 1924 in Cleveland, Ohio. His parents were Harold Rowe Holbrook Sn. and Aileen Davenport. In his memoir Harold: The Boy Who Became Mark Twain,  Hal Holbrook describes how his parents abandoned their children. He three years old and his sisters were one and two. He was subsequently raised by his grandfather, as were his two sisters. When he was twelve years of age, his grandfather died. In the memoir, he also describes visiting his father in a mental asylum and how as a child, he hoped his mother would return but she never did so.

Fulfilling a promise to his paternal grandfather, Hal Holbrook attended and graduated from the Culver Military Academy. It was when he elected to do a drama course at Culver that Holbrook fell in love with acting. He then enrolled at Denison University in Ohio, graduating in 1948. During World War II  Hal Holbrook met his first wife Ruby Johnson in Newfoundland, Canada when they appeared together in a plan. In his senior year at Denison University, the head of the theatre department told  Hal Holbrook about a job in the Southwest of US which involved doing education shows.  Hal Holbrook and Johnson put together a series of shows from various Shakespearean plays and other sources. The couple drove between all over the southwest putting on shows for various educational institutions. It was while living in New York City and unable to find work that he began developing his solo show based on the life of Mark Twain.

In 1954  Hal Holbrook held his first solo performance of Mark Twain Tonight at the Lock Haven State Teachers College in Pennsylvania. Sullivan eventually saw the show and invited Holbrook to appear on his show, The Ed Sullivan Show on the 12 February 1956. The show was first broadcast on television in 1967. The Mark Twain Tonight show continued to be performed by Holbrook for decades including a show on the centenary of Mark Twain (Samuel Clement’s) birth.

Hal Holbrook won a Tony Award for Mark Twain Tonight and had also won five Primetime Emmy Awards. In 2003 he was presented with the National Humanities Medal.