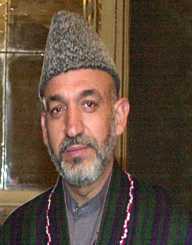 Hamid Karzai was the former President of Afghanistan born on December 24th, 1957. He was elected president in 2004. After his master’s graduation, Karzai actively participated in raising funds and weapons for rebel groups in his country. He completed two terms as president. During his time he devoted his efforts in bringing great reforms to his country. He managed to create a good relationship with other countries like Pakistan.

The little known about Hamid Karzai’s early life is that he was born on December 24th, 1957 to an ethnic Pashtun family. His place of birth was Karz, Kandahar in Afghanistan. He was the son of Abdul Ahad Karzai who served as Afghanistan’s parliament Deputy Speaker in the 1960s. Hamid Karzai has six brothers.

He traveled to India after his graduation and joined Himachal Pradesh University situated in Shimla. He was an exchange program student. He studied political science and international relations.   By 1983 he had attained his master's degree. This was just after the Soviet invasion invaded Afghanistan in 1979.

Hamid Karzai teamed up with anti-government rebels in Pakistan after his graduation. He helped raise funds and funneling weapons to be used by the rebels. He acquired these supplies from Saudi Arabia, Iran, the United States and Pakistan. In 1988 he joined the rebels in Tarinkot upon his return to Afghanistan.

The rule of Mohammed Najibullah ended in 1992. This gave way to democracy to the country with the Peshawar Accords treaty which Karzai drafted along with others. In the same year, he was appointed as the first deputy minister of the new government. He was arrested after a while after he was accused of spying Gulbuddin Hekmatyar, the leader of a recalcitrant rebel. Fortunately, he found a way of escaping.

In 1996, he initially supported the Islamic Emirate of Afghanistan later known as the Taliban. However, he later quit his support for Taliban. Instead, he supported the opposition of Taliban known as the Northern Alliance.  This was after his father was murdered in 1999 and Taliban were accused of the murder.

Foreign political leaders formed a coalition and selected Hamid Karzai as the president of Afghanistan. This was on December 22nd, 2001.  In the 2004 free elections in Afghanistan, he ran for the presidency. Despite accusations that he funded his campaign with government funds, he won the elections by a landslide. Out of the 34 provinces that participated in the voting, he took the lead in 21 provinces.

He was not quite popular during his reign as president but still maintained his position in the 2009 elections.  From 2001 he successfully brought partnership between his country and India. He also maintained a mutual relationship with other countries like Pakistan. He remained in power until September 29th, 2014 when his term as president came to an end.

The United States House of Representatives awarded Hamid Karzai with a commemorative medallion in 2002. Later in 2003, Queen Elizabeth II of Great Britain honored him with an Honorary Knight.

Hamid Karzai is married to Zeenat Quraishi, a gynecologist by profession. The couple tied the knot in 1999. They are blessed with one son, Mirwais and two daughters: Malalai and Howsi. He also had another daughter in September 2016.