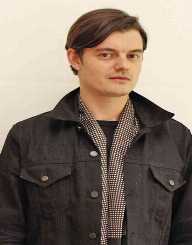 Sam Riley is a singer, actor and a model, best known for his role as Ian Curtis in biographical film Control, and as Diaval in the 2014 film Maleficent.

Samuel Peter W. "Sam" Riley was born on 8th of January, 1980, in Menston, West Yorkshire. His parents are Amanda and Andrew, and he has two older brothers, Jack and George, and a younger sister Annabel. Sam went to Malsis School in Cross Hills and then attended Uppingham School. After high school, Sam was rejected by both London Academy of Music and Dramatic Art and the Royal Academy of Dramatic Art; he was a member of the National Youth Theatre.

Sam Riley formed a pub rock band named 10,000 Things. The group was signed with Domino Records in between 2003 to 2006. The band released an album via Voltage Records in 2002, and with Polydor they did one self-titled record, it was rated zero out of ten and was dropped soon after. His brother George was Bass in the band.

After the band disbanded in 2005, Sam worked in a clothing factory in Leeds and as a waiter before debuting in television movie Tough Love in 2002.

Sam Riley gained recognition after playing Ian Curtis, singer of Joy Division in biopic Control during 2007. Franklyn, a dystopic film came the next year, with him still the star. Since then, Sam landed in Brighton Rock and On the Road, where he starred alongside big names like Helen Mirren, Garrett Hedlund and Kirsten Stewart.

In 2014, Sam was cast as Diaval alongside Angelina Jolie in Maleficent, gaining more fame. Sam has acted in fourteen titles, in television and movies. His latest stint is as Douglas Archer in SS- GB, a mini-series set in an alternate timeline where the Nazis occupy Britain.

After finding fame in Control, Sam Riley was recruited to be a poster boy for Burberry’s 2008 Autumn/ Winter collection. In 2014, he modeled for Ermenegildo Zegna’s Fall/winter collection in 2014.

Sam Riley met Romanian-German actress Alexandra Maria Lara on the set of Control. The pair married in 2009, and they have one son born in 2014. Sam and his family live in Berlin.