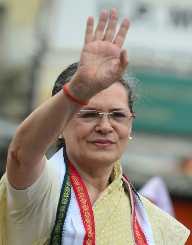 Sonia Gandhi was born on December 9, 1946, in Vicenza, Italy. She spent her adolescence in a town near Turin and was raised by a traditional Roman Catholic family. Her father Stefano was a builder, who fought against the Soviet military during World War II. He was a supporter of Benito Mussolini.

Sonia studied at the Bell Educational Trust, where she enrolled in 1964 to study English. The following year, she met Rajiv Gandhi while working at a local restaurant. The two began dating and married in 1968. They had two children together.

Both Sonia and Rajiv kept out of politics. However, they moved to India in 1977 for a short time. Rajiv entered politics in 1982 after his younger brother died in a plane crash. During this time, Sonia was a housewife and took care of the couple’s children. When her mother-in-law was assassinated, and her husband was elected as the prime minister, Gandhi had to turn to the public. She worked as her husband’s official hostess and accompanied him to public events.
A tragedy struck Gandhi in 1991 when her husband was assassinated. She refused to become the Prime Minister in his place, and instead, the party chose P.V. Narasimha Rao. The party struggled with popularity and in 1996, lost the national elections.

In 1997, Gandhi decided to join the Congress Party and ran as the primary member in the Calcutta Plenary Session. The following year, she became the party leader. In 1999, her right to become the Prime Minister was challenged, since she was not of native origins. After this, Gandhi offered to resign her position as the party leader, which resulted in major support to her and the party.

In 1999, Sonia Gandhi was elected the Leader of the Opposition of the 13th Lok Sabha and took office as the Leader of Opposition. After several years in office, in 2004, Gandhi launched her Ordinary Man campaign, against the Indian Shining campaign of the National Democratic Alliance. She was again re-elected and was chosen to be the head of the 15-party coalition government, which was later named the United Progressive Alliance.

After the defeat, the NDA again questioned her foreign origins and threatened with various measures, if she would not resign. The NDA filed several lawsuits, but the Supreme Court of India dismissed them. Gandhi recommended Manmohan Singh as the prime minister.

In 2006, Sonia Gandhi announced that she is resigning from Lok Sabha and the chairmanship of the National Advisory Council. As the chair of the UPA, she had an essential role in making the National Rural Employment Guarantee Scheme. She also supported the Right to Information Act.

In 2009, she led the UPA to win the general elections. Her party won 206 Lok Sabha seats. In 2013, she became the Congress President for the 15th consecutive year, becoming the only person in history to do so.

As of 2012, her son Rahul has taken a bigger role in the party. It was speculated that she had cancer-related health problems after Gandhi visited the United States to have surgery. In 2013, she was listed by the Guardian as one of the best-dressed people over 50s. Sonia Gandhi was also ranked the 21st most powerful woman by the Forbes magazine.