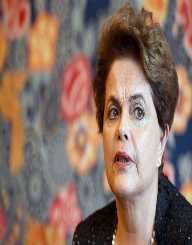 Dilma Rousseff is a Brazillian politician as well as an economist who became the first woman president of Brazil. She had to fight for democracy, justice, and development while she was 16 years old. She is known to have protested against the military dictatorship and affiliated to some leftist and Marxist urban guerrilla groups. She was however captured, tortured and jailed. It was very soon she started her life afresh with a new stand of fighting extremely for education and self-development.

Dilma Rousseff became a very powerful fellow and got involved in the contemporary political scene in Brazil. She is known to have played a pivotal role in establishing Democratic Labour Party in Rio Grande de do Sul. She has so much contributed to the efficiency of the energy of her state. She served as the Secretary of Energy, Mines and Communication as well s excelled as the Chief of Staff of President Luiz. She ran for Presidency and won after which she was sworn in as the President.

Dilma Rousseff was born in Southeast Brazil to a Bulgarian lawyer and a school teacher. She is a daughter of Pedro Rousseff and Jane Da Silver who were both in an upper-middle-class household. She received her education at the Central State High School and Our Lady of Sion in which she was introduced into the local political scene by Claudio Galeno. Dilma Rousseff was very much involved in resistance against dictatorship and belonged to the leftist group. She later became a part of a militant group, National Liberation Command. On 16, January 1970, she was arrested and tortured differently before being released in 1972 to start a new life afresh.

Dilma Rousseff completed her education and earned a degree in Economics from the Rio Grande do Sul Federal University has returned from prison. However, she went back to her former position upon the weakening of dictatorship. She was later appointed the Secretary of Finance for Porto Alegre between 1986 and 1988 before she assumed the role of Secretary of Mines, Energy and Communication in 1993. There, she gave an impressive contribution to energy efficiency as well as the increment of power production. Da Silver, when he became the president appointed Rousseff as Minister Mines and Energy in 2003.

In 2005, Dilma Rousseff was later appointed as the Chief of Staff. However, Silva’s term as the president was limited by constitutional law. He groomed Rousseff to be his successor. By 2010, she had thrown herself and her weight into the commitment of the presidential campaign with the promise of maintaining Silva’s policies. She had a widespread support and won the election with over 56% valid votes. Dilma Rousseff was however sworn in as the President of Brazil in 2011. Her agenda as the president of Brazil was to ensure economic stability and to battle poverty as well ensure political reform. Her foreign policies are meant to strengthen Brazil and put it in the global political arena. The foreign policies are based on the interest of the people.

However, her administration witnessed accusations of political corruption. These accusations brought about the resignation of five of his cabinet ministers as well as six government officials. Dilma Rousseff also fired two other people herself. However, Lula was said to have been involved in the scandal at that period. She later got reelected as the President in 2014 with a very narrow margin.

Dilma Rousseff spent four years of her administration to improve the welfare of the poor and the citizens as a whole. She was able to lift over 36 million people out of poverty. Apart from this, she generated over R$368 billion which is added to the Social Fund. She was later listed as the 3rd, 2nd, 4th and 3rd most powerful woman in the world in 2011, 2013, 2014 and 2015 respectively. Dilma Rousseff also received other international recognitions which include the Order of Stara Planina in Bulgaria, 2011 and Knight of the Collar of the Order of Isabella the Catholic in Spain around 2014.

Dilma Rousseff was married to Claudio Linhares between 1968 and 1981. Sooner, she married Carlos Franklin with whom she had her first and only child, Paula Rousseff. The two divorced in 2000. She, however, enjoyed history and opera. She even gets herself enrolled in Greek theatre. She had had lymphoma before she was treated. Presently, she has a net worth of $ 1 million.