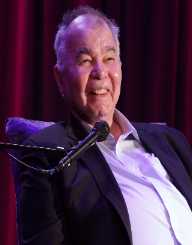 American singer-songwriter John Prine is a Grammy-winning artist who popularized the songs "Angel from Montgomery", "Paradise", and "Illegal Smile". A number of his tracks are covered by other famous artists such as Johnny Cash, George Strait, and Bonnie Raitt to name a few.

Back in 1998, Prine underwent radiation treatment and surgery due to a squamous carcinoma cell that was discovered growing on the side of his neck. Because of the cell, doctors had to remove a portion of his neck and tongue while some of the radiation caused damage to his salivary glands. Prine recuperated in a year, but the operation left his voice with a gravelly tone.

Prine resides with his wife, Fiona Whelan, at his home at Nashville. The couple had three children together.

Music In His Blood

Born on October 10, 1946, at Maywood, Illinois, Prine was born into a family who has an ardent love for music. His parents were William Prine and Verna Hamm.

Prine's grandfather was also a musician who played the guitar for Merle Travis. Prine started playing the guitar when he was 14 years old and continued to play it all throughout his adulthood. He studied the instrument at Old Town School of Folk Music in Chicago. However, his passion was put on hold for his enlistment in the US army for the on-going Vietnam war at the time.

Prine served as a carrier during the Vietnam War wherein he was stationed at Germany. He finished his service after two years and went to Chicago.


Discovery Of The Country Singer

During the 1960s in Chicago, he performed a lot of folk-country music while being busy absorbing the local night scenes. He became a regular performer at established nightclubs such as The Fifth Peg, Earl of Old Town, Bulls, Somebody Else's Trouble and the Quiet Knight.

Eventually, Prine was discovered by esteemed actor-musician, Kris Kristofferson. Kristofferson lent a hand in landing him his first contract. He published his self-titled album in 1971 under Atlantic Records. The album was well-received by many hence the continuing relationship between him and the record company. Under Atlantic Records' contract, he recorded three more albums under their name until he moved to Asylum Records.

During the 1970s, Prine released a couple of albums that gained recognition from various states. He released his second album, "Diamond in the Rough" which was a stripped down and focused on bluegrass music in contrast to his first album.

In the 1980s, Prine left Asylum Records and formed his own record company named "Oh Boy Records". He went on to receive a Grammy Award for his work on The Missing Years, which he collaborated with Howie Epstein. He also received a 2004 Grammy for his album entitled Beautiful Dreamer under the category of Best Traditional Folk Album. Prine continued to produce and write music under his label and he was awarded the 2016 Song Lyric Awards by the New England Chapter of PEN.

In 2017, he took home the Artist of the Year Award at the American Music Honors & Awards and released his new album, The Tree of Forgiveness on April 13, 2018. The album was produced by Dave Cobb and contains tracks that featured several artists such as Brandi Carlile, Jason Isbell, Dan Auerbach, and Amanda Shires. The Tree of Forgiveness is Prine's highest-ranking album to be included in the Billboard 200.