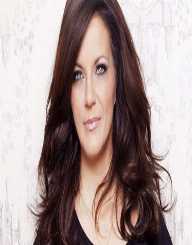 American country music singer Martina McBride was born on the 29 July 1966 in Sharon, Kansas. Her father played in a band, The Schiffers. Martina later joined the band, singing and playing the keyboard. They did gigs around Sharon, and McBride gained confidence as a performer at a young age. Her parents are Daryl and Jeanne Schiff. The family lived on a farm and Martina has three siblings. Brothers Martin and Steve and a sister Gina. Both brothers are musicians.

In 1987, Martina McBride was playing in a band Lotus when she met studio engineer John McBride. They married in 1988 and moved to Nashville in 1989. In Nashville, John McBride worked as a sound engineer. McBride did various jobs while trying to break into the music scene in Nashville. Her husband started working for Garth Brooks who heard McBride and gave her an opportunity to open at one of his concerts. Her husband helped her prepare a demo which they sent to RAC. As a result, McBride was offered a recording contract. In 1992, she released her first album The Time Has Come. She follows up album The Way That I am was a hit and My Baby Loves Me made it to number two on the music charts.

In 2010, Martina McBride left RAC and was contracted to Nashville Records.