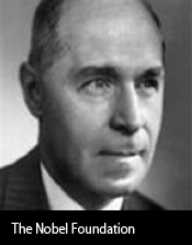 Hermann Joseph Muller won the Nobel Prize in Physiology & Medicine for his pioneering discovery that X-rays could bring mutations in the genes. He was one of the forefathers of modern molecular biology. He focused his research on genes and their mutations and warned the world about the dangers of radiation.

Hermann Muller was also a great teacher, and he educated young minds throughout his life.

Hermann Muller was born in New York on December 21, 1890, to parents Hermann Muller Sr. & Frances Lyons. He came from a humble background as his father made his living by working as a craftsman. His star sign was Sagittarius.

From an early age, Muller showed a great inclination towards studies, particularly in Science. He finished his early education from the Morris High School in the Bronx.

Being from a humble background, Hermann Muller couldn’t afford college fee, but his exceptional talents won him the Cooper Hewittscholarship. He went to the Columbia College in 1907. To support himself he worked part-time jobs while in college.

Hermann Muller became increasingly attracted to biology and was a supporter of eugenics – a genetic improvement of the humans.

He finished his B.A. in 1907 and then went to the Cornell Medical college to continue research on genetics on a fellowship. That’s when his teaching career began.

After obtaining his Ph.D. degree, Hermann Muller joined the William Marsh Rice Institute to teach biology. In the same year, he also published a book titled ‘The Mechanism of Mendelian Heredity’.

Hermann Muller also started his research on gene mutations, a field to which he would later dedicate his life.

In 1918 he shifted to the Cbia olumCollege and then to the University of Texas where he remained as a professor till 1932.

At the University of Texas, Muller extensively researched on gene mutations and formulated the principles on which such mutations take place. He also made his groundbreaking discovery of the effect of X-rays in the mutations of genes during this period.

After living in Berlin and then in Russia for a few years, Hermann Muller returned to the US in 1940 and joined the Amherst college. A few years later, he became a professor in the Zoology Department of the Indiana University where he worked till 1964.

Hermann Muller then worked for a year at the Institute for Advanced Learning in the Medical Sciences, California.

Hermann Muller made significant contributions to the world of molecular biology, and he educated the world about the harmful effects due to radiation and the mutations they caused in genes.

For his extensive research on gene mutations, Muller was awarded the Nobel Prize in Physiology and Medicine in the year 1946. He also received the Darwin Wallace medal from the Linnean Society of London.

Hermann Muller was married twice. His first marriage was to Jessie Marie Jacobs, a mathematician.  They married in 1923 and had a son named David before separating in 1935. Both of them were unhappy in the relationship.

Four years later, Muller married again. This time to Dorothea Kantorovich.  They had a daughter Helen J. Muller who’s a professor emeritus at the University of New Mexico.