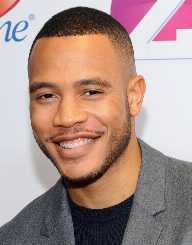 Trai Byers was born on July 19, 1983. He is an American actor best known for his role as ‘ Andre Lyon’ in the popular drama series ‘ Empire’ He has appeared in quite some films. In 2011, he appeared in the soap opera ‘ All My Children’ He also starred in ‘90210’ as a businessman and the civil rights film ‘ Selma’ He is also a religious man.

Trai Byers was born on July 19, 1983, in Kansas City, Kansas. His father was in the United States Air force. Byers and his family moved from one country to the other due to the nature of his father’s work. There is a time in his life that his family lived in the Philippines. He completed his high school education in Georgia. He joined the University of Kansas after high school where he graduated with a Bachelors Degree in Communication. He was an exemplary student school, and he was in love with performing.

Before joining the University of Kansas, Trai earned an associate’s degree at Andrew College. Byers was so much into performing that he attended the American Musical and Dramatic Academy in Los Angeles. He, later on, went to the Yale School of Drama, one of the prestigious schools in the United States. He graduated in 2011 with a Masters Degree in acting. He began his career in 2011, that is, immediately after college.

In 2011, Trai Byers made his television debut in the soap opera ‘All My Children.’ He was acting as ‘ Mookie’ who was an abusive ex-boyfriend. In 2012, he starred in the popular teen soap ‘90210’ as a businessman. He started becoming popular with the public, and so he moved to the big screens. He starred in the sports film ‘JayHawkers’ which portrayed the real-life story of racism, discrimination, and basketball at the University of Kansas.

Also, Trai starred in the film alongside Justin Wesley. In 2014, he played civil rights activist, ‘James Forman’ in ‘Selma.’ He acted alongside David Oyelowo who played the character of Martin Luther in the film. The film was directed by Ava DuVernay. In the same year, the hit drama series ‘Empire’ premiered. He was given the role ‘ Andre Lyon’ who is the eldest son of ‘ Lucious Lyon’ (Terence Howard) a music mogul. He enjoyed success and fame from playing a role in the drama.

Trai Byers’ role in the hit drama series is that of a character who suffers from bipolar disorder. This character was not an easy one for Byers to fit into easily as he did not know what to do as a person suffering from bipolar. He, however, learned how people with bipolar disorder behave because he had a relative who was suffering from the same and he could watch the said relative closely to learn more about bipolar disorder. His character as ‘ Andre Lyon’ is also not easy as he is pitted against his younger brothers, ‘ Hakeem’ (Bryshere Gray) and ‘ Jamal’ (Jussie Smollet). The role was a challenge to him at first, but he adapted very well. He has a continuous character in the series ‘ Empire’ as it is in its third season.

Trai Byers and Grace Gealey, an Empire costar, started dating while producing the series ‘Empire’. On October 7, 2015, Byers and Grace announced that they were engaged at the Daytime Talk Show, ‘ FABLife’ The two got married on April 14, 2016, on Grand Cayman Island. Byers is a religious man, and he shares his spiritual priorities on social media. He is portrayed as a calm person who mostly keeps to himself.