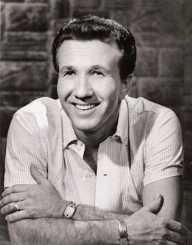 Martin David Robinson was born 26th September 1925, in Glendale, Phoenix, Arizona, in the United States. He came from a large family, with nine siblings. His father took odd jobs to try and support the family, but he was a heavy drinker, and Robbins’s parents divorced in 1937.

At 17 years of age, Robbins enlisted in the United States Navy to escape his troubled home life, and he served during World War II. It was during this period that he learned the guitar and started writing music.

In 1947, after he was discharged from military service, Robbins began performing at local venues in his hometown. He moved into radio, hosting his own show on KTYL. He then got his own television show on a local station in Phoenix, KPHO-TV.

One of the guests Robbins had on his show got him a recording contract with Columbia Records. His early recordings were more of the pop genre, including, She Was Only Seventeen, and A White Sports Coat and a Pink Carnation.

Covers of his songs were recorded and performed by many notable artists including, Elvis Presley, Johnny Cash, The Who, and the Grateful Dead.

Along with his love of music, Robbins loved NASCAR racing. With the success of his music career, Robbins was able to finance racing vehicles. He raced during the 1970s and 1980s at the Daytona International Speedway and Talladega Superspeedway.

He had six finishes in the top ten, and many crashes along the way. After his death, Robbins’s Dodge Magnum was restored and given to the Talladega Museum. It was on display between 1983 and 2008, but it has since been purchased by a private collector.

During his music career, Robbins recorded 52 studio albums and 13 compilation albums. He had 100 singles. Over the years, he had 17 number one singles and over 80 singles that charted in the top 40.

Robbins died on 8th December 1982, after a quadruple coronary bypass operation from which he did not recover. He had a history of heart disease.

Among his many awards and honors, Robbins has the following:

1982:   Inducted into the Country Music Hall of Fame

1985:   Inducted into the Arizona Songwriters Hall of Fame

Robbins married Marizona in 1948, and they were still together at the time of his death.