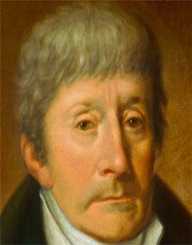 Italian composer Antonio Salieri was born on the 18 August 1750 in Legnago in the Republic of Venice.

In his mid-teens, Antonio Salieri went to Vienna with F.L. Gassman, the music director and imperial court composer who introduced him to Emperor Joseph II. He also made the acquaintance of Christoph Gluck and Pietro Metastasio which helped his career.

Antonio Salieri's first opera, Le Donne Letterate was performed in 1770 at the Burgtheater in Vienna. Eight years later, he was appointed Hofkapellmeister, and during this time he composed operas which were presented in Austria as well as by other companies in Italy and France.

Salieri worked with Lorenzo De Ponte, supporting his work and collaborating on various projects. Da Ponte in time became Mozart’s librettist. Salieri’s opera Tarare (1787) was translated into Italian by De Ponte as Axur, re d’Orumus and was popular with the Viennese audiences. His final opera was performed in 1804 and from that time onwards Salieri concentrated on composing sacred music. He was also a teacher and students include Beethoven, Franz Liszt, and Franz Schubert.

Beethoven dedicated The Three Violin Sonatas, Op 12 (1797) to Antonio Salieri. From the late 1880s, there were rumors that Salieri had once tried to poison Mozart. But this was based on fiction a Rimsky-Korsakov opera entitled Mozart et Salieri (1898) which in turn was based on a short story by the Russian writer Pushkin in 1830. The playwright Peter Shaffer dealt with the topic in his play Amadeus (1980). Amadeus was later filmed (1984) with F. Murray Abraham portraying Antonio Salieri.

Antonio Salieri's first biographer was Ignaz Frenz von Mosel, a student, and friend. Salieri asked von Mosel to record the important events of his life after his death. Working from Salieri’s letters, von Mosel published a biography which has subsequently been used as the source of information about Salieri's life.

Alexander Wheelock Thayer who published a Life of Beethoven wrote a nineteen-part series Dwight’s Music Journal of Boston and based his information on Salieri on von Mosel’s letter as well as research he carried out in Vienna and Berlin. Thayer’s information on Salieri was forgotten about until 1989 when Theodore Albrecht edited Salieri, Rival of Mozart.

Antonio Salieri was married to Therese Helferstorfer between 1775–1807. He fathered eight children, and towards the end of his life, he had dementia. Spending his final years in an asylum, he died in Vienna on the 7 May 1825.