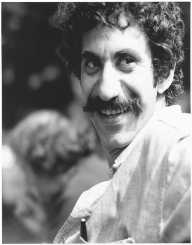 Jim Croce was a guitarist and folk and rock singer.

James Joseph "Jim" Croce was born in South Philadelphia, on 10th of January 1943. His parents were Italian Americans James Albert Croce and Flora Mary. He had a brother Rich Croce.

Jim Croce had musical talent; he learned the accordion. Jim played Lady of Spain with the accordion, showing off at church socials and family gatherings. Later he learned how to play the guitar on his own.

Jim Croce went to Upper Darby High School in Delaware County, Pennsylvania, and graduated in 1960. After a year in Malvern Prep School, he went to Villanova University. He graduated from University with Bachelor’s degree in Psychology, minoring in German, in 1965.

During his University years, Jim Croce was part of the Villanova Singers and Villanova Spires. He also performed off campus with the Spires, often known as the Coventry Lads instead of Villanova Spires. Jim was a student DJ at the WKVU radio.

Jim Croce met Ingrid Jacobson at the Philadelphia Convention Hall when he was in Villanova. The pair married in 1966, and performed as a duo, touring colleges and bars. The couple released an album in 1969, but it did not sell well. Eventually, they moved to Lyndell Pennsylvania, where they had one son, Adrian James together.

Jim Croce converted to Judaism upon his marriage to Ingrid. A week after his honeymoon, Jim enlisted in the Army National Guard, to avoid being deployed to Vietnam. He was on active duty for four months and had to undergo training twice.

Jim Croce's first album, Facet was released in 1966, a wedding gift from his parents, hoping that the album would fail. The opposite happened, as the five hundred printed copies were sold.

Jim Croce and Ingrid worked on the farm in Lyndell, and he would continue to write songs during his downtime. He also sang in local bars.

Jim Croce had a photographic memory when it comes to songs, and could reproduce the tune when he had heard it once. Jim wrote five songs in ten days, including Photographs and Memories, and Time in a Bottle.

Jim Croce's first solo album was released in 1972, while his singles You Don’t Mess Around with Jim and Operator received airplay. Maury Muehleisen’s guitar playing accompanied the songs.

The success of the first album helped his new single Bad, Bad Leroy Brown reach Number one in 1973. The family moved to San Diego, California.

Due to financial needs, Jim and Maury toured America, singing in cafes, campuses and folk festivals. Jim Croce's success with the third album allowed him to travel to Europe, and Jim also promoted his album on television.

Jim Croce first appeared on American Bandstand, then a few more shows after.

Thirty-year-old Jim Croce and five other people died on board on a chartered Beechcraft E18S on 20th September 1973.

The plane crashed into a tree, after the pilot suffered a heart attack, leading to failure in gaining enough altitude to clear a tree while taking off. Jim Croce was buried at Haym Salomon Cemetery in Malvern, Pennsylvania.

Jim Croce's album I Got a Name, which he had finished recording a week before, was released posthumously. It was his third album; it had three songs.

In a letter that arrived at his wife after his death, Jim Croce detailed his hopes to quit singing and start writing as a career, which was most likely due to homesickness and the frequent touring.

Jim Croce's wife published I Got A Name: The Jim Croce story in 2012. His son Adrian is also a music artist, owning his label Seedling Records