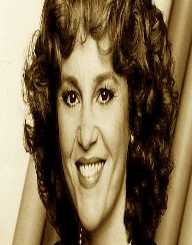 Madeline Kahn was an American actress; she is best known for her roles in Young Frankenstein and Blazing Saddles.

Madeline Kahn was born in Boston, Massachusetts on 29 September 1942. Her parents were Bernard Wolfson and Freda née Goldberg. Her father worked as a garment manufacturer. Both her parents were of Jewish descent but were non-observant. Kahn was just two years old when her parents divorced. Kahn lived with her mother and moved to New York. Kahn attended the Manumit Boarding School in Bristol, Pennsylvania. While in boarding school her mother took up acting. Kahn also became interested in performing while in school and appeared in productions put on by the school. Kahn’s mother married Hiller Kahn in 1953, and her new husband adopted Madeline, thus giving her the surname she began known as.

Kahn attended the Martin Van Buren High School in New York and graduated in 1960. For her acting ability, Kahn was able to earn a drama scholarship to Hofstra University. Kahn studied music, speech therapy and drama in the Long Island University. She graduated with a degree in 1964. After graduation, Kahn continued to study music and train her voice. While in university Kahn had worked in a German-themed restaurant as a singing waitress. While auditioning for roles after graduating Kahn worked as a public school teacher.

Kahn’s acting debut was in the stage production, Kiss Me, Kate. She made her film debut in the 1968 film; The Dove. 1969 saw Kahn appear on Broadway for the first time, she appeared in, Leonard Sillman’s New Faces of 1968. She appeared in her first feature-length film alongside Barbara Streisand in the 1972 film, What’s Up Doc. She also continued to appear on Broadway. She was the lead in the 1978 production of, On the Twentieth Century. She enjoyed huge success in her second major film role. The film, Paper Moon, was a black and white comedy-drama that was set in during the Great Depression. Kahn was nominated for an Academy Award for her portrayal of an exotic dancer, Trixie Delight. The next year Kahn was fired from the set of the film, Mame, due to artistic differences with the film’s star, Lucille Ball. This left Kahn to appear in the 1974 hit, Blazing Saddles. This marked Kahn’s first work with Mel Brooks.

The film was a huge success, making nearly one hundred and twenty million dollars at the box office off a 2.6 million dollar budget. Kahn, in particular, stood out for praise for her role in the film. The same year Kahn appeared in another Mel Brooks’ production, Young Frankenstein. The film starred Gene Wilder and was another big hit at the box office. She also appeared alongside Gene Wilder in 1975 for the film, The Adventure of Sherlock Holmes’ Smarter Brother. In 1977, Kahn appeared in her third Mel Brooks directed film, High Anxiety. Brooks also took the lead role in the film, which was a spoof of Hollywood thriller films. The film proved less successful than Kahn’s previous collaborations with Brooks, but it did make over thirty million dollars at the box office.

Kahn continued to appear in comedy spoofs and was part of the cast for, The Cheap Detective. Neil Simon directed the film. Kahn made a cameo appearance in, The Muppet Movie, in 1979. Kahn again teamed up with Mel Brooks in 1981 for, The History of the World Part I. The film was not considered the classic of previous efforts and its ten million dollar budget meant its thirty one million dollar grossing at the box office was rather disappointing. Kahn appeared as the romantic interest of Burt Reynold’s character in, City Heat.

She was a voice actor in the 1979 animated film, An American Tail. In 1989, Kahn returned to Broadway and received critical success in a production of, Born Yesterday. 1993 saw Kahn land another big Broadway hit as she starred in, The Sisters Rosensweig. Kahn also played a recurring character in the 1990s sitcom, Cosby. She again provided her voice for an animated film in 1998, this time in Pixar’s, A Bug’s Life.

Madeline Kahn was diagnosed with ovarian cancer in 1998. Despite the diagnosis, she continued to act. She married John Hansbury in 1999. However, the marriage was short-lived as Kahn succumbed to her cancer on 3 December 1999.

Madeline Kahn was nominated twice for the Academy Award for Best Supporting Actress. The first time in 1974 for Paper Moon and the second time the next year for Blazing Saddles. Kahn lost out to her ten-year-old co-star, Tatum O’Neal, in 1974. Both performances also brought Golden Globe nominations. Kahn also received Golden Globe nominations for Young Frankenstein, What’s Up Doc? And the 1984 TV sitcom, Oh Madeline. Despite her multiple nominations Kahn failed to win any major awards for her film work. In 1987, she won a Daytime Emmy Award for Outstanding Performance in a Children’s Programme. Kahn also received praise for her stage work and was nominated for a Tony Award in 1974 for her role in In the Boom Boom Room.