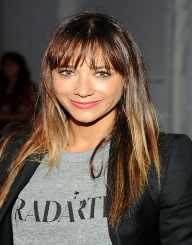 Rashida Leah Jones was born on February 25, 1976, in Los Angeles, California. She is the daughter of actress Peggy Lipton and musician Quincy, Jones. Jones and her sister Kidada Jones were raised in Reform Judaism by their mother and attended the Hebrew school. She left the school to begore she was ten years old and did not have her Bat Mitzvah.

As a child, Jones loved to study and read, and had a computer before it became popular. She also discovered her musical talent at a young age and learned to play classical piano. She attended The Buckley School in Sherman Oaks, California and made the National Honor Society. During her school years, she became involved in the theatre at Buckley. Tim Hillman tutored her. Her parents divorced when Rashida was 14 years old, and she moved to Brentwood with her mother, while her sister remained with her father.

Jones made her acting debut in 1997 miniseries The Last Don. Her next projects were Myth America, East of A and If These Walls Could Talk 2. She gained recognition in 2000 when she began acting as Louisa Fenn in the TV show Boston Public. In 2002, she earned the NAACP Image Award for her performance. Although the role she played was not major, Jones began to receive various offers for movie deals. She starred in Stephen Soderbergh’s Full Frontal and Kevin Smith’s Now You Know.

After leaving Boston Public, Jones was cast in Death of a Dynasty and appeared on several episodes of Chappelle’s Show. In 2004, Jones stared in the HBO film Strip Search. Jones had gained some recognition for her acting but was considering to leave her career to pursue a graduate degree in public policy. However, she was cast for a role of Karen Filippelli in hit TV series The Office. She joined the show in 2006 and played in the third season as a regular, and made guest appearances in season four and five.

After The Office, Jones starred in an independent film by her co-star John Krasinski Brief Interviews with Hideous Men. He also starred in the comedy I Love You, Man. Jones next big project was on the TV series Parks and Recreation on NBC. She starred in six seasons of the show as nurse Ann Perkins. During this time, she also starred in Kevin Smith’s Cop Out and had a minor role in 2010 film The Social Network.

Jones is the creator of the comic book series Frenemy of the State, published by Oni Press. Jones sold the screen rights to Universal Pictures. Her first screenplay was a comedy Celeste and Jesse Forever, written in 2009. In 2016, she co-wrote the teleplay Nosedive. Jones also wrote the 36th chapter of her father’s autobiography.

Jones is a talented singer and songwriter. She has provided backing vocals for Maroon 5 in their debut album Songs About Jane. She was also a guest artist on Tupac Shakur album The Rose That Grew from Concrete. She has also provided vocals for various soundtracks, including The Baxter, The Ten and Reno 911!: Miami. In 2011, Jones became the spokeswoman for Dove Nourishing Oil Care Collection. In 2015, she began starring in commercials for Verizon Fios.

In 2003, Jones became engaged with music producer Mark Ronson, but their relationship ended the following year. Currently, Jones is dating Colin Jost, who she met at Seth Mayer’s wedding in 2013. In her early years, Jones began practicing Hinduism, but as an adult, she now practices Judaism.

Jones has also been active in charity. She has worked to promote a nonprofit organization Peace First that teaches children to resolve conflicts without violence. She has also participated in events by Stand Up to Cancer, ONE: The Campaign to Make Poverty History and The Art of Elysium’s volunteer program.