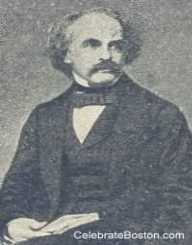 Born on July 4, 1804, Nathaniel Hawthorne is a novelist and short story writer from America. He wrote and published several short stories centered on a human. He was known for his theme which was characterized by the negative attitude, evil and sinful nature of humanity. The stories always ended with a moral message and lessons to be learned. His line of work was mostly referred to be part of the Romantic movement and Dark romanticism. He is referred to as one of America’s greatest novelist of all time. His works involve short stories and novels. He is a great-great-grandson of John Hathorne, who superseded over the trials of witches in Selem.

Nathaniel Hawthorne was born to Nathaniel Hathorne and Elizabeth Clarke Manning in SelemMassachusetts.After his initial education, he enrolled at the Bowdoin College in 1821 and graduated in1825. During his college days, Hawthorne met with several future great men. In order to hide his close relation to John Hathorne a judge involved in the Salem With trials, he added “w” to his Hathorne(Ha-w-throne) after college. He has some association with Franklin Pierce on the way to school. He was also in the same school with Jonathan Cilley, Horatio Bridge, and Henry Wadsworth Longfellow.

A year after school, 1836, Hawthrone has an editor job with the American Magazine of Useful and Entertaining Knowledge. Three years on, he was offered a position as a weigher and gauger at the Boston Custom House and since the salary was good, Nathaniel Hawthorne accepted the position. There he wrote the piece, Owl’s nest in the family home. In that comprehensive piece, he stated that“ he has not lived, but only dreamed about leaving”. He also some short stories like Young Goodman Brown and The Minister’s Black Veil. In 1937, Horatio collected all the stories and made it into one volume, Twice-Told Tales which in effect made Hawthorne famous locally.

Hawthorne had a job as Surveyor for the District of Salem and Beverly and Inspector of the Revenue for the Port of Salem in 1946. He worked there until the change in political administration in 1848 when he lost his job. During these two years, Hawthorne’s busy schedules prevented him from penning down stories. That same year, he lost his mother, which also affected him so much. He refers to the day as the darkest hour he had ever lived. Luck finally found Hawthorne as he was appointed the corresponding secretary of the Selem Lyceum that same year.

In 1850, Nathaniel Hawthorne went back to his first love “writing” to make the most out of it. His first work was The Scarlet Letter published in March 1950. He was able to sell 2500 of his publications in the first ten days. According to the records, he made about $1,500 in the space of 14 years. The book also had a record of being one of the first mass-produced books. The Scarlet Letter had several positive reviews and critics. He later in that year moved to a farmhouse near Lenox, Massachusetts with his family. In 1851, he came out with The House of the Seven Globe, which also had positive reviews from critics. Some critics like James Russel Lowell picked The House of the Seven Globe over The Scarlet Letter and noted it was the best contribution to New England’s history. Hawthorne’s other works include A Wonder-Book for Girls and Boys and The Blithdale Romance, 1852.

Hawthorne once again moved to Concord after just a year at Berkshires. There she wrote the biography, The Life of Franklin Pierce for his friend, Franklin Pierce. He followed it with the publication Tanglewood Talles. Hawthorne got a position as a US consul in Liverpool when Franklin was elected President. The position came with joy, and his family received it with much enthusiasm. In Sophia Peabody’s words, it was second to the Embassy in London. He moved with his family and stayed there till his appointment ended in 1857. The family toured France and Italy after his service and returned to Wayside, his home in 1860. During his days there, he published The Marble Faun his first since 1853. During the American Civil War, Hawthorne moved to Washington D.C and had the chance to meet figures like Abraham Lincoln and several others. During this time, he came out with Chiefly About War Matter in 1862. As he grew, his health began to fail and as he suffered some severe stomach problems which contributed to his death.

Some of Nathaniel Hawthorne works came under several criticisms for poor judgments and dishonesty. With his work Twice-Old Told Tales and Mosses from an Old Manse, he was criticised by Edgar Allan Poe for plagiarism. However, he also praised him for being a genius and the spectacularly thoughtful nature of his work. Others like John Greenleaf Whittier, Henry James, and Evert Augustus Duyckinck praised him for his style and the deeper psychology infused in his writings.

Nathaniel Hawthorne married Sophia Peabody on July 9, 1842. The couple had three childrenUna, Julian, and Rose. He died on May 19, 1864. He died on his trip to his friend Franklin Pierce. Even though his neighbor Bronson Alcott had initially objected to his decision, Hawthorne persisted. He died in his sleep in Plymouth, New Hampshire. A tribute The Bells of Lynn was written in his honor by Longfellow in 1866.