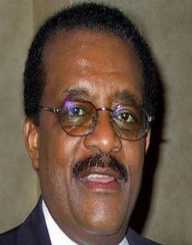 American lawyer Johnnie Cochran was born on the 2 October 1937 in Shreveport, Louisiana to Hattie and Johnnie L. Cochran. His father was an insurance salesman and his mother Hattie was an Avon Lady who sold beauty products.

Johnnie Cochran graduated top of his class at Los Angeles High School (1955). He then studied at the University of California, LA where he obtained a BA in Business Economics (1959). In 1963 he received a Juris Doctor from Loyola Law School.

After passing his bar exam, Johnnie Cochran started practising as a lawyer in 1964. He was soon in private practice as a partner in Cochran, Atkins & Evans located in Los Angeles. He built up a reputation within the black community as a lawyer not afraid to take on police brutality cases, and he also had celebrity clients including Michael Jackson, Snoop Dog, Tupac Shakur and Todd Bridges, but it was the O.J. Simpson trial that brought him national and international attention. O.J. Simpson was a former American footballer who was charged with a double homicide.

The Johnnie L. Cochran Snr. Scholarship at the University of California in Los Angeles was set up for African-American men. Cochran has also worked to empower economically derived communities including serving as the chairman of the Upper Manhatten Empowerment Zone.

Johnnie Cochran's first wife was Barbra Berry whom he married in 1960. They divorced in 1977, and he married Sylvia Dale in 1985. Cochran had three children, two daughters from his first marriage, Tiffany and Melodie and a son Jonathan with a former partner Patty Sikora. Johnnie Cochran died on the 29 March 2005. He had been diagnosed with a brain tumour in 2003.