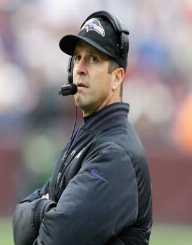 John Harbaugh is an American football coach who is best known for winning Super Bowl XLVII.

Harbaugh was born on 23 September 1962 in Toledo, Ohio. His parents are Jacqueline Cipiti and Jack Harbaugh. His father Jack Harbaugh had been a football player for the New York Titans and coached in college football for over forty years. Harbaugh is also brother to Jim Harbaugh who has played and coached in the NFL and is currently the American football coach at the University of Michigan. He also has a sister Joani. Harbaugh attended Pioneer High School in Michigan. Upon graduation, he went to the Miami of Ohio University. Harbaugh studied political science and graduated in 1984. He was not as successful a football player and suffered some injuries during high school and college. Despite this, he went to work with his father at Western Michigan University.

Harbaugh spent seven years working in Cincinnati. Harbaugh moved colleges again in 1997, this time taking the special team coordinator and defensive backs coaching position at the Indiana University Bloomington. After one year in Indiana Harbaugh was given his first chance in the NFL. The Philadelphia Eagles offered Harbaugh the special team coordinator position. The Eagles made the playoffs six times while Harbaugh was with the franchise, including a run to the Super Bowl in 2004. Harbaugh was given responsibility for the defensive backs in 2007 but left in January 2008 to take up the head coach position at the Baltimore Ravens. Harbaugh was considered an outsider for the position but impressed the Ravens’ owner Steve Bisciott during the interview. It was unusual for a coach with no defensive of offensive coordinator experience to be given a head coaching role.

Harbaugh was coming into the organization at the same time as rookie quarterback Joe Flacco, and they became the first rookie head coach and QB to win their debut game in the NFL. The Ravens would lose three of their next four games, but rallied to an 11-5 record and made the playoffs as a wildcard. The Ravens beat the Miami Dolphins and the Tennessee Titans before being defeated by rivals Pittsburgh Steelers in the AFC Championship game. Harbaugh greatly reduced the number of turnovers the Ravens made, and they led the league in point differential.

Harbaugh’s second season was up and down with the Ravens only achieving a 9-7 record. Despite this, the Ravens again achieved a wildcard playoff berth and defeated the New England Patriots by 33-14. The Ravens were dumped out in the next round by the Indianapolis Colts, the Ravens only managing a single field goal in the divisional round. The 2010 season saw the Ravens forced into the wildcard round of the playoffs again despite a 12-4 record. They routed the Kansas City Chiefs, 34-7 and progressed to face divisional rivals the Pittsburgh Steelers. The Ravens had faced each other twice during the regular season and won a game apiece. The Ravens were defeated following a second-half comeback by the Steelers. 2011 saw the Ravens win their first AFC North title as they again went 12-4.

The Ravens were given a first-round playoff bye and defeated the Houston Texans to advance to the AFC Championship game for a second time under Harbaugh. They were defeated by New England Patriots when Billy Cundiff missed a thirty-two-meter field goal. The Ravens had an unimpressive 2012 regular season finishing with a 10-6 record. They were unfancied in the playoffs having lost four of the last five regular-season games. The Ravens defeated the Indianapolis Colts in the wildcard round. In the next round, the Ravens overcame the Denver Broncos in an epic 38-35 clash that had two periods of overtime. In the AFC Championship game, the Ravens faced the New England Patriots again. This time it was the Ravens who came from behind to win.

In the Super Bowl Harbaugh faced off against his brother Jim, who was coaching the San Francisco 49ers. The media dubbed the game the ‘Harbowl.’ The Ravens won 34-31 to win the Super Bowl for the second time in franchise history. The success in the playoffs also made Harbaugh the first coach to win a playoff match in every one of his first five seasons. The Ravens suffered a big loss coming off their Super Bowl win with the retirement of the talismanic Ray Lewis. The Ravens finished 8-8 and missed out on the playoffs for the first time under Harbaugh.

The next season the Ravens improved to a 10-6 record, this was in spite of a change at offensive coordinator and wide receiver Ray Rice being arrested and suspended. The record was good enough for a wildcard place. They faced off against divisional rivals the Pittsburgh Steelers. The Ravens ran out easy winners 30-17. They faced the New England Patriots and led throughout the game only for the Patriots to take the lead in the fourth quarter and win 35-31. 2015 marked the lowest point of Harbaugh’s Ravens tenure as the Ravens finished the season 5-11, Harbaugh’s first and only losing a season. Injuries ravaged the Ravens roster in 2015 which undermined their season. The Ravens finished the 2016 8-8 and again missed the playoffs.

Harbaugh is married to Ingrid Harbaugh with whom he has a daughter.

Harbaugh is a devout Roman Catholic.