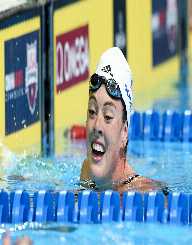 American champion swimmer and Olympian Allison Schmitt was born on the 7 June 1990 In Pittsburgh, Pennsylvania to Gail and Ralph Schmitt. She had four siblings and was raised in Canton Michigan.

Allison Schmitt was a pupil at the Canton Charter Academy and then the Canton High School (graduating 2008). In 2008, she enrolled at the University of Georgia where she studied psychology.

Following her older sister’s interest in swimming competitively, Schmitt started swimming at a young age and was a member of the Ann Arbor Swim Club in Ann Arbor Michigan from the age 11 until she turned 14. When in high school, she became a member of the swim team and in 2007 began to show her potential. She became a member of Club Wolverine and was coached by Bob Bowman who was also the coach of swimmer Michael Phelps. When Bowman moved to the North Baltimore Aquatic Club in 2008, both Phelps and Schmitt followed him in preparation for the summer Olympics. Bowman went on to win her first Olympic medal at the 2008 Olympics:  a bronze medal in the 4x200 meter freestyle relay.

Attending the University of Georgia, she became a member of the Georgia Bulldogs swim team. During the summer breaks, she continued training with Bowman and Phelps.