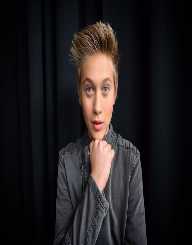 Thomas Nicholas Kuc is a Brazilian actor who is best known for his role in the television show, Game Shakers.

Kuc was born in Brazil on 10 October 2002. His parents are Brazilians of Polish descent. As a child, Kuc and his family moved about as his father’s work with a multi-national company took him to multiple countries. The family lived for a period in Europe and Canada before moving to the United States of America so the children could go to school. Kuc has a sister named Alma. Alma is a professional gymnast and member of the Polish Olympic gymnastics team. Kuc also took gymnastic classes at the age of five. He also enjoys surfing. His travels have also taught Kuc to speak some languages.

Kuc landed a role in the television show, Game Shakers in 2015. The show is produced and aired on Nickelodeon. Game Shakers was created by Dan Schneider who was the producer of the hit Nickelodeon shows, Keenan &Kel, Zoey 101 and Drake and Josh. Game Shakers is a series that follows the lives of two friends from Brooklyn, who design a video game for a science project. The game proves successful, and they start a video game company which they name Game Shakers. In the show, Cree Cicchino plays Babe Carano. Babe Carano is one of the creators of the game Sky Whale which launches the Game Shakers company. Carano is a seventh grader and plays the comedy and light-hearted character as a contrast to the uptight Kenzie, played by Maddison Shipman.

The show also stars Kel Mitchell, from the hit 1990s, show Keenan & Kel and the 1997 film Good Burger. Mitchell plays the character Double G, a rapper who becomes an investor in Cicchino’s character’s business after they illegally use his song in their game. Cicchino also works alongside child actor and rapper Benjamin "Lil' P-Nut" Flores, Jr, who has appeared in Happy Feet Two and released You Might Be the One in 2010. Flores Jr plays the character Triple G in Game Shakers, Double G’s son, and works as a game consultant for Cicchino’s character, Babe Carano.

Kuc plays Hudson in the show. Hudson is described as cute but dumb. He is used by the owners of Game Shakers to test their new games. The show Game Shakers has aired for two seasons with the third season in production. It was first aired on 12 September 2015 and has attracted an average audience of one million six hundred thousand viewers. It was nominated for the Favourite TV Show Award at the 2017 Nickelodeon Kid’s Choice Awards. The show is aired in U.S.A, U.K, Ireland, Canada, New Zealand and Australia. Cicchino has also hosted Nickelodeon’s Ultimate Halloween Costume Party, along with her fellow Game Shakers cast members. Kuc also appeared in the 2015 horror film, The Diabolical. Kuc played Danny in the film. The film received mostly negative reviews and grossed just over eighty thousand dollars at the box office.