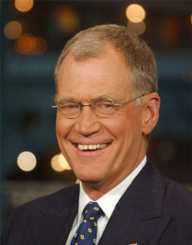 David Letterman was born on April 12, 1947. He is an American comedian, writer, producer and television host. He is famous for hosting the late-night television show titled ‘Late Night with David Letterman’ from 1982 to 2015. He founded the company ‘Worldwide Pants’. He has also produced ‘Everybody Loves Raymond’ and ‘The Late Late Show with Craig Ferguson’ among other productions.

David Letterman was born on April 12, 1947, in Indianapolis, Indiana in the United States of America. He was born to Harry Joseph Letterman who was a florist and Dorothy Marie Mengering who was a church secretary. He loved collecting model cars. He attended Broad Ripple High School. He also worked as a stock boy at the local Atlas Supermarket.

David Letterman later joined Ball State University in Indiana where he studied radio and television. He graduated from the school in 1969. Letterman is a member of the Sigma Chi fraternity. He began his career as an announcer and newscaster at the Ball State University student-run radio station. He was later fired for not acknowledging classical music.

David Letterman officially began his career as a radio talk show host on the WNTS (AM). In 1971, he appeared as a pit road reporter for ABC Sports’ coverage of the Indianapolis 500. In 1976, he became an anchor and weatherman in the Indianapolis station WLWI. In 1975, he moved to Los Angeles in California where he started performing comedy at The Comedy Store. David also wrote material for sitcoms such as ‘Good Times.’

David Letterman became famous when he appeared on ‘The Tonight Show with Johnny Carson.’ He viewed Johnny Carson as his mentor from a very young age. In 1978, he became a regular guest host in Carson’s show. In 1980, he was offered his own show titled ‘The David Letterman Show’. The show did not last long but it was a big success. He later had his own show titled ‘Late Night with David Letterman’. The show became popular with the young audience. In the show he included, Top Ten List, Viewer Mail, Pencils Tossed at the Camera and Stupid Pet Tricks among others.

In 1968, David Letterman married Michele Cook, but they divorced in 1977. For ten years he was in a relationship with former head writer and producer on ‘Late Night’ Merril Markoe. In 2009, he married Regina Lasko with whom he has a son called Harry. In 2015, he was earning an annual income of thirty five million dollars as estimated by Forbes. He is currently seventy years old.